From the Vaults: Hawke Talk

Ethan Hawke, who was born in Austin, has made many a return to our city 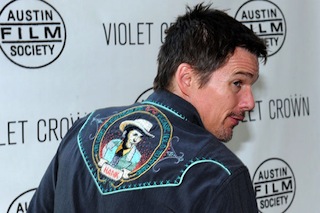 Although Ethan Hawke left Austin after his parents' divorce when he was still a young child, our city will always remain his birthplace. His association with Richard Linklater, with whom he frequently works (in addition to the Before Sunrise/Sunset/Midnight trilogy) returns him to Austin for work and the occasional film premiere.

Speaking to Carson Baker for "Life Story" in 2007, Hawke discussed his semi-autobiographical novel, The Hottest State – a property Hawke also used for his debut as a film director. He observed, "It's going back to the place of origin. Texas has always been that for me. There's a great mythos to Texas that's easy to use. It's bigger than life, and it just grabs you."

In 2001 in "E Is for Everything," Hawke spoke with Kimberley Jones on the occasion of the Austin premiere of Richard Linklater's Tape (which also co-stars his ex-wife Uma Thurman "the project originated out of Hawke and Linklater's mutual interest in digital video." Hawke's description of the film's birth seems to typify the easy working relationship between Hawke and Linklater. "Rick and I … had a couple of different ideas about wanting to do something where we experimented with digital film, " Hawke explained. "We were trying to figure out what would be the right idea to just go and play with the medium. And then I read this one-act by this guy [Stephen Belber] that I had met here in New York, and I just flipped for it. So I sent it to Rick, not really thinking that we would actually do anything with it. I sent it to him more just to kinda say, 'check this out.' And then he read it, and he was like, 'this is what we should do, we should go play with this.' And then it snowballed from there."