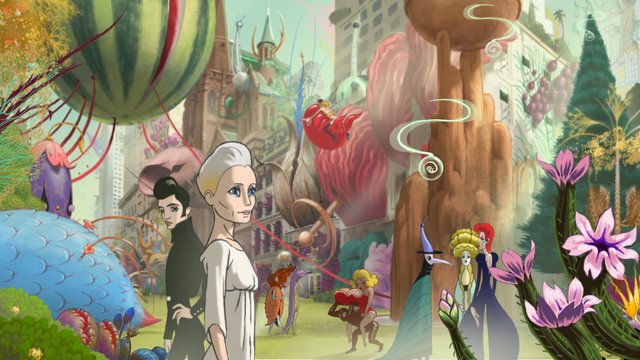 Drafthouse Films gets animated with its newest acquisition, 'The Congress', starring Robin Wright and Paul Giamatti

Seem the folks at Drafthouse Films finally shook the last few items out of their holiday luggage from Cannes and found they'd acquired another film: Semi-animated sci-fi mindbender The Congress.

Starring Robin Wright (House Of Cards) Jon Hamm (Mad Men), Harvey Keitel Bad Lieutenant, Reservoir Dogs) and the goddam straight up genius of Paul Giamatti (Sideways, and our new favorite cult crush, John Dies At The End), The Congress is a headtrip mix of live action and animation. It's directed by Ari Folman, who is no stranger to mature movies with a dash of illustration (he did animate the Oscar-nominated Waltz with Bashir.)

Empire magazine has said The Congress "exists somewhere in the twilight zone between the existential brainteasers of Charlie Kaufman and the psychedelic wonders of Hayao Miyazaki." Empire needs a history lesson. This is adapted from The Futurological Congress by the big bad bone daddy of existential genre fiction Stanislaw Lem, the author behind the oft-adapted Solaris. In his original 1971 novella, Lem's repeated lead character Ijon Tichy falls out of a political conference into a drug-addled future where chemicals gloss over the environmental apocalypse. The Congress adds digital media to the mix, as an aging actress (Texas Film Hall of Fame-r Wright) sees herself replaced by her computer simulacrum. If the drugs and technology are good enough, can anyone tell the difference? And what does that mean reality?

Expect a US release in 2014 on VOD/digital and theatrical.