Austin School of Film Screams for Summer of Mexican Horror

Pesadillas Calidas series highlights classics from across the Border

Bored of horror films that think Mexico is just a place where co-eds go on vacation? The Austin School of Film is bringing six slices of terror from South of the Border with its new Summer season, Pesadillas Calidas: Horror Films From Mexico.

The new series brings some unfamiliar – well unfamiliar to most American audiences – horror from Mexican cinema. Starting with 1968's Suspiria-esque Even the Wind is Afraid, the series stretches to 1984's macabre child horror Poison for the Fairies. And, if you've ever wondered what would happen to a set of fangs when they're on the receiving end of a plancha from a lucha libre legend, there's no way you'll miss Santo Vs. the Vampire Women.

Each film will be presented by series programmer Sarah Cook at the Austin School of Film (1634 E. Cesar Chavez.) So, get out you best blanket and settle down for a chilling night under the stars with a suitable beer from their Mexican sponsor, Indio. Here's the full schedule:

June 8 Even the Wind is Afraid
June 22 The Cemetery of Terror
July 13 Special Midnight Screening of Santa Sangre
July 27 Terror and Black Lace
August 10 Santo vs. The Vampire Women
August 24 Poison For The Fairies

All screenings start at 9pm, except Santa Sangre, which commences at the Witching hour. 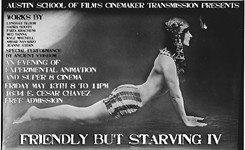 Who's Your Dada?
ASoF's "Friendly But Starving III" Avant-Garde celebration