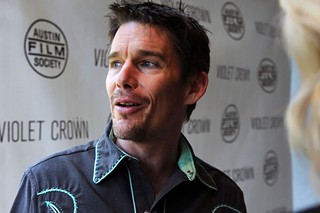 As the mercury climbs ever upward and it becomes harder and harder to deny that summertime is officially here, we find our attention spans shortening precipitously. If you're in the same boat (boats! water! cool! aw, maaaan!), check out these quick clips on the comings and goings in Austin film.

• Less than a week after Alamo Drafthouse CEO Tim League caught serious grief on social news site Reddit over allegations of human resources fumbles and management mishaps, another Austinite popped up to do an AMA (or "Ask Me Anything") session to wildly different results. Ethan Hawke's Q&A hovered near the top of the front page of the site for much of Wednesday afternoon, and the Before Midnight actor was praised by redditors for his thorough and thoughtful responses on topics as varied as his favorite food (chips and salsa), his private island (a modest 8 acres off the Nova Scotian coast), and what actor he'd most like to work with (Leonardo diCaprio). Flip through the full session here, but beware: That's 3,200-plus comments you'll be wading through.

• Local film composer Brian Satterwhite announced on Facebook this week that Walt Disney Studios is planning to use two of his compositions in the forthcoming feature The Lone Ranger, starring Johnny Depp, Helena Bonham Carter, and Armie Hammer. Look for his name in the credits when the movie hits theatres next month.

• In more solemn news, Flix Brewhouse VP of Operations Walt Powell passed away Tuesday at the age of 33. As Flix put it in a public Facebook post:

Funeral arrangements are still in the works, so keep an eye on the memorial page created in his honor for more information as it becomes available.