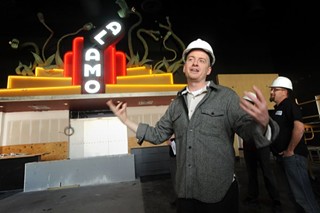 South by Southwest's favorite cat lands a movie deal, a University of Texas alumnus wins a huge award, and much more are in this edition of Film Flam.

• Thursday, Alamo Drafthouse CEO Tim League hopped on social news site Reddit to do a Q&A session – known there as an AMA (or "Ask Me Anything"). A former employee of the chain took the "anything" part of that cue literally, taking the opportunity to call the theatre owners out on scheduling and insurance issues. See all that followed in the session over at The Daily Dot.

• Friday afternoon, the Drafthouse released a new no-talking PSA – this time starring Julie Delpy and Ethan Hawke from Richard Linklater's new film, Before Midnight. It's mildly humorous to us that they taped it standing on the balcony of the Violet Crown, but nevermind all that. Check out the full clip, complete with the duo's signature dialogue and Delpy's fourth-wall-breaking meltdown, below:

• The University of Texas announced last week that filmmaker Brian Schwarz, a 2012 alumnus of UT's filmmaking MFA program, will be honored with a Student Academy Award. Schwarz will be in Beverly Hills, Calif., next weekend to accept the award – no word yet if it's gold, silver, or bronze – for his film Ol' Daddy. Read a Q&A with the filmmaker on the College of Communication's website.

• Our grumpiest friend is going to be a movie star. Deadline Hollywood reported Wednesday that Tardar Sauce (aka Grumpy Cat) is going to be "given the power of speech" in a forthcoming "Garfield-like feature film" from Broken Road's Todd Garner and Sean Robins. Nothing to be grumpy about there … unless of course it's awful.

• Leave it to an aerospace engineering grad student to give the best look at Austin's nightlife we've seen in some time. KUT spoke yesterday with Andrew Takano, whose "Sleepwalking Austin" video has racked up 13,000 views on YouTube. Watch the full, dreamy time-lapse here – and then marvel at the fact that he did it all by hand with nothing but "a tripod, steady hands, and 'a ton of work in post.'"