RSVP for Stateside shows at the TV gathering

Generous news from the folks at ATX Television Festival: They'll be making some of their biggest events open to the public. Fans of Friday Night Lights, Boy Meets World and everything AMC screens, start RSVPing now.

The festival, which runs June 6-9, held free events in its inaugural year, but for its sophomore extravaganza it's offering more shows to more people. All their events at the Stateside Theater will be open to the public. You just have to RSVP for individual events. There's not an unlimited number of seats, and badge holders get in first, but the ATX folks are hoping to drag you away from your screen for an hour or two to meet the stars of your favorite shows.

Festival co-creator Caitlin McFarland admits she stole the idea from her old bosses at the Tribeca film Festival. She said, "Tribeca was founded, post-9/11 to bring the community back together." That's why the New York festival developed a family day and an outdoor screening programs.She said, "We knew how important those events were for that neighborhood, and Austin is such a small town/big city, and you couple that with the community television creates, and the community a festival creates, and we just knew that we wanted to start somewhere."

Her fellow cofounder Emily Gipson said, "We're sticking with the free RSVPs at the Stateside because they are our most popular screenings: Boy Meets World, Friday Night Lights, and the AMC screenings." That means non-badge holders will have a chance to sneak a peek at a new episode of railroad drama Hell on Wheels and the first episode Low Winter Sun, the gritty cop procedural premiering on Aug. 11 straight after the new season of Breaking Bad. Gipson said, "You can choose one or the other, but you can sit in through both as well."

Last year, the festival's most popular free events were probably the special Friday Night Lights screening at Hotel San Jose, and a cartoon block sponsored by Hasbro, Both were big successes, and both are back this year. Considering the role of FNL in local TV history, do the festival bosses ever see a day when it wouldn't play a role at ATX? "The question is, would you want to do the festival without Friday Night Lights?," McFarland replied. As for the Hasbro event, she said, "We had pancakes and people coming in their pajamas and curling up on the floor and watching cartoons. We wouldn’t feel right making that a badge-only event. We want kids ages three to 10, boys and girls, to hang out and have some pancakes."

Visist www.atxfestival.com/programming/events/ to RSVP for shows. Pick up next week's Austin Chronicle for more from the festival founders, plus interviews with some of their celebrity guests. 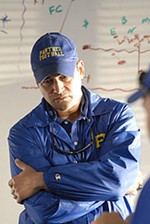