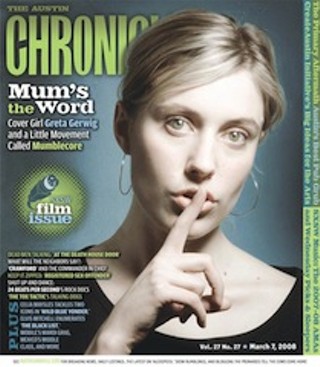 There was little question in 2008 of what image belonged on the Chronicle cover of the March 7 issue which previewed that year's South by Southwest Film Festival: Greta Gerwig. Gerwig, the star of the widely praised Frances Ha (opening in Austin today), was the obvious choice. She starred in no fewer than three festival films.

Well before her breakout performances in Noah Baumbach's Frances Ha, which she co-wrote with the director, and 2010's Greenberg, also directed by Baumbach and starring Ben Stiller, it was evident to indie-film watchers that Greta Gerwig was an It Girl for the new millennium and had the talent to go the distance.

In 2008, Gerwig starred in three SXSW films: Baghead by Jay and Mark Duplass, whose work was also growing in prominence at the time; Nights and Weekends, which Gerwig co-wrote and co-directed by Joe Swanberg, the reigning king of mumblecore; and Yeast, by first-time director Mary Bronstein. Gerwig's debut appearances on film – in Swanberg's LOL and Hannah Takes the Stairs – had already screened at previous SXSW Film Festivals. Spencer Parsons interviewed Gerwig for the Chronicle's 2008 cover story, "All Around Gal."

Gangly charm and cautious spontaneity combine in Gerwig to create the naturalistic performances that are the crux of her popular appeal. A couple more films in the indie realm – You Won't Miss Me and House of the Devil – played at local festivals in subsequent years before her step up to the big time playing opposite Ben Stiller in Greenberg. A couple forays into bigger, studio productions came her way with Ivan Reitman's No Strings Attached and Russell Brand's remake of Arthur led Gerwig back to working with more independently minded writer/director types.

She was cast as the lead in Whit Stillman's Damsels in Distress, a member of Woody Allen's ensemble in To Rome With Love, and as the lead in Daryl Wein's Lola Versus. Gerwig made return appearances in SXSW films om 2010 with A NY Thing in 2011 with The Dish & the Spoon.

This is an incomplete filmography for Greta Gerwig, although you can click on any of the title links above to read The Austin Chronicle reviews. The Frances Ha trailer is below. Once a mumblecore darling, Gerwig's name is now shouted from cinema marquees.