DVDanger: The Burning and The Town That Dreaded Sundown

Another gruesome twosome for your weekend's viewing 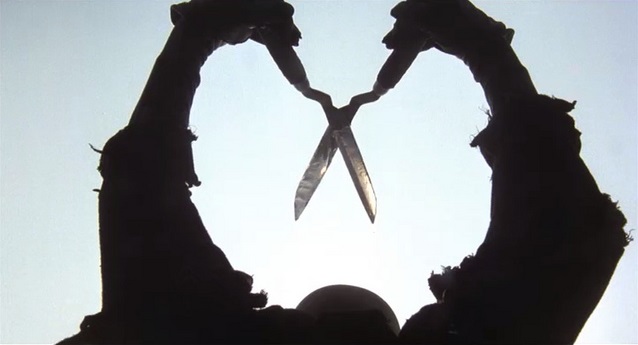 Just a little something off the top: The classic image from the Weinstein brothers' oddly overlooked slasher classic 'The Burning', out now from Shout! Factory

Y'know, it's funny. Considering that the filmmaking Weinstein brothers of Miramax fame made their feature-writing debut with slasher flick The Burning, it's odd how they don't talk about it much.

Prior to its release, they were music promoters dabbling in repackaging concert movies for the US market. Then Bob and Harvey wrote a script for a Summer camp massacre flick. Somehow, in all the years as one of the cooler-than-cool movie brands (Taranatino, Smith, Damon, Affleck, all take a bow), it never gets brought up. Mysteriously, it's even completely absent from a 2000 Fortune bio of the brothers. Funny, that.

We'll get back to the Weinsteins in a moment. Let's talk about someone who was never ashamed to be sleazy. Charles B. Pierce was an unashamed master of the drive-in chiller. Starting in 1972 with sasq-ploitation classic The Legend of Boggy Creek, he pretty much invented what has become a TV mainstay: Narrated re-enactments of actual events. Boggy Creek has got some time back in the sun, and now The Town That Dreaded Sundown gets a Blu-ray outing, courtesy of Shout! Factory.

Actually, it's a double bill, with Town paired up with another Pierce production, 1979's The Evictors. It was the last movie in his six year run of a feature a year: After that, his secondary careers as a scriptwriter and set dresser took over. It's not got the cachet of Boggy Creek, but it's a solid little thriller. In the midst of WWII, a couple (Vic Morrow and Jessica Harper) move to a small town in rural Louisiana so he can work at the lumber mill. The only problem is that the house they moved into has a long history of new tenants ending up dead. Pierce pulls his re-enactment trick out of the bag within this standard narrative by having the neighbors recount each of the deaths, and the parts come together pretty quickly: One former resident hasn't really given up on their home.

The film may have been consigned to B-grade status, and it was never going to be anyone's marquee release, but Harper holds this all together. She shows the same wide-eyed anxiety that caught Dario Argento's eye two years earlier for Suspiria. A year later she was one corner of Woody Allen's love square in Stardust Memories. But here she brings the trauma of a young bride in slow-burning danger. 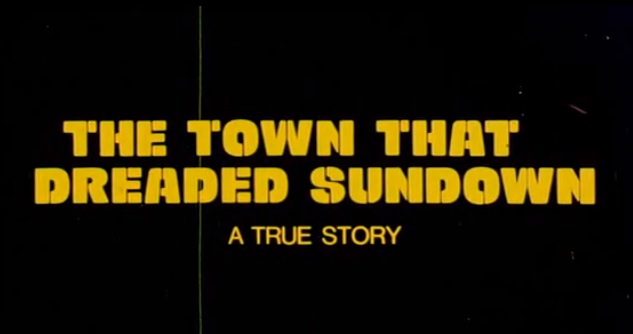 But the main feature is 1976's The Town that Dreaded Sundown. It's generally tagged in as a horror film, but that's a misnomer and a simplification. It's more of a creative re-enactment, inspired by the grisly Moonlight Murders of 1946. One of the first well-documented serial killings, with five members of the Texarkana community slain in a bizarre and still unsolved killing spree. Both it and The Evictors get a superb spruce-up for the re-release, but the treatment this underdog film gets is a masterclass in restoration.

Unlike many "based on a true story" flicks (including The Evictors), Town peddles itself on its historical accuracy. Yeah, kind of a big claim to make. Andrew Prine, who plays Deputy Norman Ramsey, says he rewrote the third act to give it the actual finish that real history denied. Meanwhile, historian Jim Presley's audio commentary coolly analyzes that truths and historical inaccuracies of the film. So, sorry, folks, but the railroad chase scene, the death by trombone, and even the killer's flour bag mask are creations for the screen.

But Pierce still pulls together something of real cold dread. The verite style gives a doom-laden aura that overcomes some of the amateur-hour acting. And the reason his work has stayed fresh and pertinent is that he really knew how to craft a unique and disturbing sequence. The trombone death sounds hokey, but it really fits together. When veteran stunt man Bud Davis (playing the still-unknown Phantom Killer) sucks in the air after that memorable murder, there's a strange and tragic pathos.

There's no such sympathy for Cropsy, the slasher of Shout!'s other big release this week. The Burning has become sort of a touchstone for 1980s horror fans. It could have been a genre classic. Like Friday the 13th, there's a plethora of future stars (Holly Hunter, Jason Alexander and, yes, calm down, the rumors are true: You do get to see Fisher Stevens' taint). It has some quality gore effects by from Tom Savini and a Carpenter-esque soundtrack, courtesy of prog rock keyboard wizard Rick Wakeman. There's even a slight basis in real life: Cropsy was the name of Staten Island's mythical bogeyman (the stellar documentary Cropsey is recommended viewing on that subject.)

And it would seem a lot more innovative if Sean Cunningham's genre-defining blood bath hadn't come out the year before.

It was arguably just bad timing. The Weinsteins had the script knocking around in 1980, but Cunningham just beat them to the slash. And, frankly, it does come across as a bit of a knockoff. The siblings and director Jim Maylam first crossed path when they released two of his films (Genesis: In Concert and the James Coburn-narrated Olympic documentary White Rock.) His only other narrative feature to that date was one of the last gasps of 1970s WWII spy thrillers, The Riddle of the Sands, and so he at least gets points for realizing that slashers were the way to go.

Actually, for most of its length, The Burning is like a slightly creepier version of Meatballs. A bunch of horny teens set off to a summer camp not knowing that five years earlier, and at a completely different campsite just over the lake, a caretaker had been burned to near-death in a prank gone awry. Some gore fans may find it surprisingly slow moving, with the first major death not until almost an hour in. But when the blood does finally start flowing, it's in big spurts. Y'see, there's no slow stalking around for Cropsy. He does a little bit of hunt-the-fornicator (remember, kids, sex=death in slasher flicks), but the sudden frenzy of the infamous raft massacre is worth the wait. Plus, a pre-Seinfeld, pre-baldness Jason Alexander was pretty funny. He has the leering swagger of a young Bill Murray, with a lot more approachability.

It's that fine line between terror and laughter. As Lou David (the man behind the Cropsy mask) puts it in one of the excellent extras, "If I can't play the fool, I'll play the ghoul." And it's kind of a shame that The Burning got so buried in the woodpile. Cropsy is a memorable deformed villain (as Savini points out, he was the real deal, since there was no Jason Voorhees in Friday the 13th). David puts forward a reasonable logic for why Cropsy could even come back, if they wanted to make sequels (well, I say reasonable, but no dumber than Jason being a space-faring zombie. And, speaking of Voorhees, has anyone else noticed how much the pre-hockey mask killer of Part 2 looks like the Phantom killer. Really.)

Who wore it better? Jason Voorhees in "Friday the 13th Part 2" or the Phantom Killer in "The Town That Dreaded Sundown"?

So, Harvey? Bob? Seriously. You wanna bring Cropsy back? Now could be the time. After all, no way you could do a worse job than Texas Chainsaw 3D.

The Town That Dreaded Sundown/The Evictors and The Burning are both now out of DVD/Blu-ray combo packs. Next week's coming attraction in DVDanger: I argued that Keri Russell is a modern scream queen for Dark Skies.