The newest music video from Austin stalwart Bob Schneider looks like it was cut out of a Tim Burton film. Think The Nightmare Before Christmas or some of the stranger scenes in Sweeney Todd. It’s got an eerie otherworldliness to it that makes it appear as if the storyline takes place in a whole other dimension. 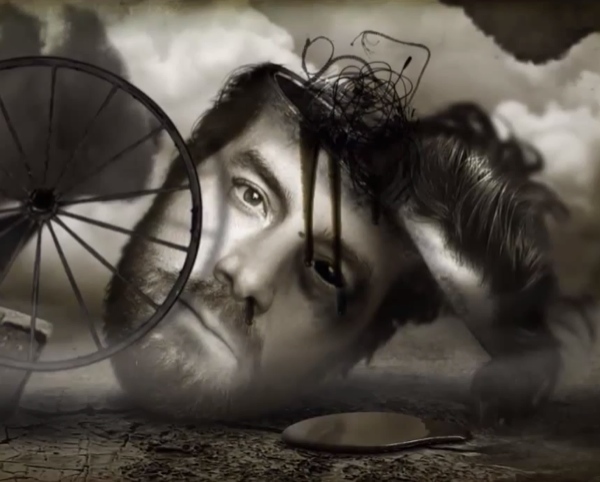 Local musician and filmmaker Gary Dorsey is the man to credit for “Digging for Icicles”’ aesthetic appeal. He produced the video at the behest of Bob Schneider with a series of animations created through Adobe Photoshop and AfterEffects. Speaking after its release, Dorsey told the Chronicle that the connection – his experience working with character animations in Flash and Schneider and his own collective visions – proved the perfect fit.

“[The song] is a beautifully dark song in which Bob sings in his low register,” Dorsey explained. “It's haunting. To me, it's a song of desperation, a longing and searching for something to fill a specific void deep in the soul. The lyrics are so descriptive. The character will go to any lengths to find this one thing.

“I basically took the approach of creating a short film to play out the story. It was important to me to show the incredible desperation we’ve all felt at some point in our lives. I did my best to create this desolate landscape where the only way out is in, through this old well. We follow the character in his journey.”

About that character, though. The gangly bird-man creature’s brought with him a rather peculiar partner in crime on this journey of his: the severed head of Bob Schneider. Dorsey said that the disembodiment was his idea entirely.

“I wanted something that felt more story-bookish. I had no idea where to incorporate him, but then when I was in the early stages of the opening scene, I already had the main character pulling a cart to play out the lyric ‘…with your bag full of dreams’ later in the song. While watching the rough render over and over, this light came on to put Bob’s head in the wagon and have him sing the song. His head actually becomes the ‘bag full of dreams’ that is being carted through the landscape.”

Pretty creepy, right? Dorsey says that his next two ventures won’t be so mired in murk. He’s already at work on an upcoming lyric video for Los Lonely Boys, and he hopes to get get started on a video for the Polyphonic Spree’s new album shortly.