AFF Has the Right Idea About ‘Wrong Numbers’

To celebrate its 20th anniversary, the Austin Film Festival’s Made in Texas film series is taking a look back at films that world premiered at the fest. On Wednesday, AFF screens Alex Holdridge’s 2001 underage coming-of-age comedy, a self-proclaimed “little movie” that paid off in big ways.

Wrong Numbers was Holdridge’s first film, cobbled together over four years and on a shoestring budget. (Read more about the production process in our 2001 story "Crimes and Misdemeanors.") The unassuming charmer – about two underage college kids just trying to score some beer – won the Audience Award at AFF in 2001 and kickstarted a career. 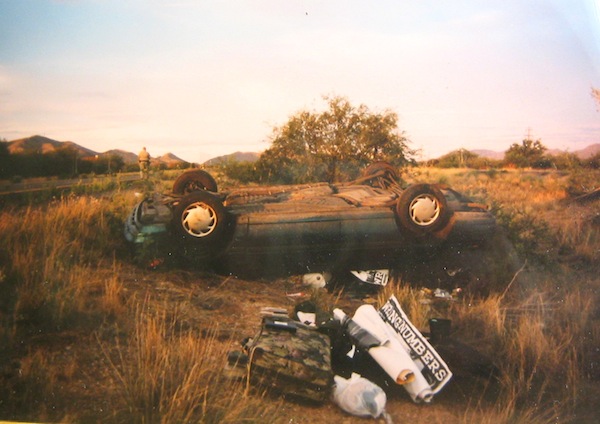 Alex Holdridge's car, after it flipped during his cross-country move to L.A. in 2003. (Note the 'Wrong Number' posters in the foreground.) The car accident would work its way into Holdridge's script for 'In Search of a Midnight Kiss.' (photo by Alex Holdridge)

The film attracted attention from Hollywood: A big-budget remake got stuck in development hell, but Holdridge went on to make two more well-received indies, 2003’s Sexless (which has the rare distinction of winning both the audience and the competition awards at SXSW), and 2007’s In Search of a Midnight Kiss, which won the Independent Spirit Awards’ coveted John Cassavetes Award. He’s currently in post-production on his fourth feature, the love story Meet Me in Montenegro.

I badgered Holdridge via email (he now lives in Berlin) for his thoughts on Wrong Numbers. This is what he had to say:

“I’m really honored and excited about AFF showing our little movie again, mostly so it can inspire other young filmmakers to pick up a much better camera than we used, find some Texas actors/comedians and make their own stories. Pretend you're going to the Velveeta Room during an open mic night. You might just sit back and say to yourself, ‘I can do better than this guy.’ And you are probably right. I look forward to watching whatever films you make in the years to come. Thank AFF for giving me and my friends our first shot at showing something, and starting a whole world of filmmaking that has consumed me and my friends since.”

Actually, Holdridge can thank 'em himself: He’ll be in attendance for AFF’s retrospective screening on Wednesday, May 8, and he’s bringing with him the film’s two stars, who haven’t exactly gone quietly into the night: Matt Bearden, a former Funniest Person in Austin titleholder and current on-air funny man for KLBJ’s Dudley & Bob Morning Show, and Scoot McNairy, who pretty much owned 2012 at the movies, with much-admired turns in Killing Them Softly, Promised Land, and Best Picture winner Argo.

Tickets are on sale now for AFF’s Made in Texas series showing of Wrong Numbers, which takes place Wednesday, May 8, 7pm, at the Texas Spirit Theater at the Bullock Museum.