Sometimes, when I'm sitting in really bad traffic – like on 71 after a Circuit of the Americas event lets out or on Congress at rush hour or on I-35 at precisely any moment ever on days ending in "Y" – I daydream about being Inspector Gadget.

I want my car to sprout legs like a giraffe so I can just walk over to my dinner reservation, or else I wish I could squeeze into the tiny width of a road stripe so I could zoom past bottleneckers and inattentive nincompoops. Sometimes, I even consider what it'd be like to hop up to the rooftops, flitting from building to building like Superman.

Except some people actually do that last one.

In his 2010 documentary My Playground, Danish filmmaker Kaspar Astrup Schröder follows a parkour crew, Team JiYo, as they gracefully pop through Copenhagen and other cities, using buildings as their launch and landing pads. To successfully do parkour (that is, "the sport of traversing environmental obstacles by running, climbing, or leaping rapidly and efficiently"), you really have to know your environs – natural and otherwise – so architect Bjarke Ingels invited the team to some of his buildings "to explore and unfold their skills."

How appropriate that this screening takes place on the rooftop of the Jones Center, hosted by AMOA-Arthouse. Just try not to feel too self-righteous as you look at all those brake lights down below.

MY PLAYGROUND - TEASER from KASPARWORKS on Vimeo.

AMOA-Arthouse screens My Playground on Wednesday, April 24, 8pm, as part of the Rooftop Architecture film series. 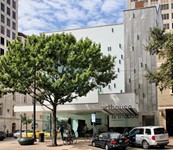