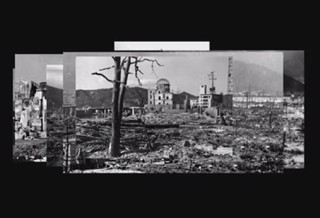 Hundreds of thousands of images exist of monuments – the White House, the Eiffel Tower, the Great Wall of China, Stonehenge, and on and on.

Indeed, there are so many that entire websites exist for the sole purpose of stitching together images to recreate places in 3-D. But how many of those pictures have you looked at? Like, really looked at?

Chances are, the images that come to mind that you've seen countless times, looped on news stations and reprinted in history books until they're imprinted on your mind's eye as if you were there, are those of great triumph and tragedy: 1963's March on Washington, Apollo 11's flight, the 9/11 attacks.

Despite having never been there, I could've described for you in some detail the sights of Boston before yesterday: the squares, the architecture, what have you. But without an event to contextualize them, I wouldn't have ever thought to. It's putting those images into a moving context that makes them really stick – that makes them really mean something. So then, all of a sudden, a place that existed only in a fuzzy, photo-constructed form in the back of my mind comes alive when there's a jarring event to pin it to, for better or worse.

And that's what French avant-garde filmmaker Jean-Gabriel Périot does with archival footage in his short films, which bring focus to historic events. For all their emotional depth and political statements, the shorts are deceptiv ely simple.

Take "200,000 Phantoms," which flashes picture after picture of Hiroshima from different vantage points between 1914 and 2006. On the one hand, they're just cityscapes, but on the other, there's an entire arc of birth and death and rebirth to be told in those simple layered photos.

In his first tour of the United States, Périot presents nine of his shorts – "The Devil," "#67," "The Barbarians," "Between Dogs and Wolves," "200,000 Phantoms," "Even If She Had Been a Criminal…," "Undo," "We Are Winning Don't Forget," and "Before I Was Sad" – in a double feature with a Mark Street shorts program. The back-to-back Avant Cinema evening is co-sponsored by the Austin Film Society and Experimental Response Cinema.

Come watch the masters at work as they put the "moving" in "moving image."

AFS presents We Are Winning Don't Forget on Wednesday, April 17, 7pm, at the AFS Screening Room (1901 E. 51st). Tickets to the double feature are $8 for AFS Watch members and $12 general admission. See the AFS website for complete details.