Going on an Adventure With Banff World Tour

Adrenaline junkies, artists, and film fans unite for a great cause 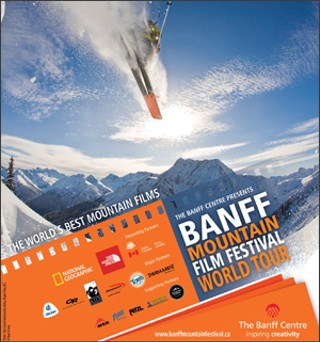 The second night of the Banff Mountain Film Festival World Tour played adrenaline-packed short films dedicated to mountain culture to a sold-out house at the Paramount Theatre on Sunday night, sponsored by National Geographic, The North Face, and Parks Canada.

The eighth Texas edition benefited Texas Parks and Wildlife and was brought to our city by Whole Earth Provision Co. The evening featured a selection of nine of the 2012 festival’s 79 films, 38 of which travel to approximately 400 locations – including the South Pole – in 40 countries spanning 7 continents. World tour, indeed.

First up was a five-minute Scottish film, "Industrial Revolutions," featuring famed trials rider Danny MacAskill. MacAskill demonstrates his mastery of the bicycle sport with perfected tricks atop railroad tracks and abandoned trains to the tune of music by Ben Howard. Reportedly, acquiring the amazing shots of his stunts demanded repeated landings and maybe a few painkillers for MacAskill. The film won Special Jury Mention at Banff.

Next was an eight-minute American short, "The Gimp Monkeys." The story highlights three friends, all who happen to be amputees, as they conquer body and mind in incredible feats of strength. One friend casually mentions his missing arm being a minor inconvenience, and another says, “You don’t sweat the small stuff after you deal with a wall like this.” The third, described by his buddies as the “one-legged Gandhi,” joins friends on top of the wall in celebration of their successful climb of El Capitan at Yosemite. Inspirational and jaw-dropping.

The third film, "Flow Hunters" from New Zealand, showed a selection of nine minutes from the full-length as a team attempts to tackled 17 New Zealand rivers in kayaks. In a particularly horrifying event, one man learns firsthand to “be humble” because “the river is boss.” The huge Paramount audience went silent as the team watched their friend dip below the white rapids' surface. The gripping-but-gorgeous scenes displayed in only a short section of the film suggest that the full doc's spellbinding footage would rival of the raw power of these rivers.

The 44-minute fourth film shown before intermission, "Crossing the Ice," comes out of Australia and was a favorite of the evening – and of the 2012 Banff festival. Taking home three prizes for Best Adventure & Exploration Film, People’s Choice Award, and the Grand Prize, "Crossing the Ice" features “lovable lunatics” and best friends Cas and Jonesy. The pair of adrenaline junkies were inspired by their love of century-old adventure stories to embark upon a mission to become the first team to make a round-trip walk – unassisted! – from the tip of Antarctica to the South Pole. One expert gave them a 5% chance of success at the beginning.

As the trip approaches, the charming and hilarious wonder duo finds out a Norwegian man, Aleksander Gamme, is planning the same trip, alone. And so the race begins. Weeks of trudging through insane conditions, whiteouts, injuries, psychological hardships, and a shortage of food kept the audience at the edge of our seats, hoping the best for all three men. As one expert said, however, their return journey was only possible because Cas and Jonesy "made a conscious decision to put themselves through hell.” As this heartwarming adventure in the Earth’s most extreme cold wrapped, the Paramount erupted in applause. The film’s many awards are well-deserved.

The sixth film of the evening took a welcomed environmental advocacy turn with the Canadian film "Highway Wilding," a 13-minute edit of a full-length documentary. Examining the effects of the TransCanada Highway, scientists determined that the devastation caused to wildlife, whose natural migratory and everyday transit patterns are severely impacted by traffic, necessitated action. In addition to field cameras that provided lovely footage of animals in their element, DNA studies were taken from hair samples, and the wolverine was chosen as an ideal study species. As one expert stated, “If this elusive creature can adapt [to highway crossing structures], so can any animal.”

Another scientist said the massive project was all about connectivity and big-picture thinking so that humans can attempt to keep intact (as much as possible) one of the last complete mountain ecosystems in the world. As a result, both over- and underpasses now exist to provide safe crossings for an enormous number of animals of various species: “Build this and they will live.” The film in its entirety must be fascinating.

Already wildly popular on the Web, "Lily Shreds Trailside," was up next. The four-minute American short documents a tiny dog, Lily, running full speed ahead and jumping with shocking agility as she chases her human over a trailside bike park in Park City, Utah.

Set in the beautiful wilds of Colorado, the eighth film of the evening is a portrait of a man of many careers. "Ernest," a five-minute film, tells the story of an 86-year-young man who is deeply in love with the mountains. The harmonica playing in the background nailed the emotion, and with a face that tells a thousand stories, Ernest is the epitome of why young children ought to have a chance to experience the great outdoors. His life lessons are ones to remember: “The best survival tool is your brain.”

The closing film was chosen to captivate, and it delivered with bold ambition. "Reel Rock 7: Honnold 3.0" is a 33-minute American film full of wonderment and awe, with laughs and adrenaline thrown in for good measure. The story of Alex Honnold, who became famous in Alone on the Wall, won Best Climbing Film at Banff. The documentary is motivating, inspirational, and reason to question the psychological intricacies of a man who climbs thousands of feet up a mountain wall completely untethered. Honnold says, “The desire must be primal,” and he would know. He believes the commitment to an adventure is essential to success and one climbing expert said of Honnold, “He doesn’t experience fear the same way most people do. It’s an ability rarely seen.”

Always in competition with himself, and perhaps the climbing greats he studies in history books, Honnold performs an insane boulder climb. The Paramount audience held our collective breath along with his friends standing below him, ready to catch him. Of course, that’s not enough, and Honnold stuns with a decision to solo the Triple at Yosemite in only 24 hours. Brilliant film footage documents his nerve-wracking ascent up three expert-only walls, one during the wee hours of the morning. "Honnold 3.0" is one to rewatch, just to believe it really happened.

When the night’s last film wrapped, I instantly wished I had been able to attend the Radical Reels Tour the previous evening. When art meets adventure in a testament to the power of the human spirit and the beauty of nature, I’m always a fan. My friend and I could not wait to return home and start sharing our new treasures and read more about everything we saw.

But my one disappointment in the 2013 Banff Mountain Film Festival was this: There was not one single woman featured in any of the nine films screened. The Paramount audience was pretty balanced, but aside from two women who inadvertently appeared onscreen near the main subjects in "Crossing the Ice," and Alex Honnold’s girlfriend showing her support of him in "Honnold 3.0," the female presence in the films was nonexistent. With countless women involved in high-stakes sports, environmental causes, and art, it seems ludicrous that none made the cut for the tour. I understand that Radical Reels featured "Endless Roads" about seven female longboaders, and that another film on Saturday cut to clips of awesome women doing awesome things. It seems odd that the evening’s celebration of free spirits and everything beautiful about our Earth turned out to be so unbalanced.

Overwhelmingly, this was a spectacular evening, and I really look forward to the 2014 tour. I’ll keep my fingers crossed that some radical women make the big screen next year.

Bento Picnic: Everything in Its Right Place
Leanne Valenti’s Japanese homecooking venue exceeds the sum of its parts 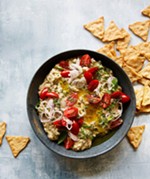