The trek up the I-35 corridor is no picnic – Texan drivers really are the worst – but the trip was well worth it for a handful of Austin filmmakers who took home prizes at the Dallas International Film Festival. 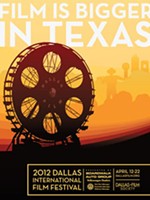