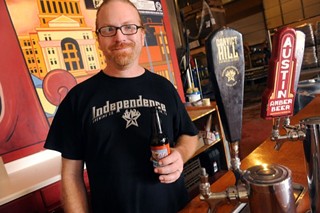 Tap in to your inner beer nerd, get hopped up on excitement, and wrap your head around this: New episodes of The Beer Diaries are premiering tonight at the Alamo Drafthouse.

The Beer Diaries is a web series that celebrates craft beer culture worldwide, hosted by BioWare co-founder Greg Zeschuk. The brew hefe is a "former medical doctor turned video game developer turned Chief Beer Enthusiast," and he's got a passion for pints. In this new installment, the Beer Diaries go behind the scenes at (512) Brewing Co., Rogness Brewing Co., and Independence Brewing Co., three Austin-based independent breweries, so what better place to celebrate the premiere than the Austin institution of the Alamo Drafthouse?

If you can't wait until tonight (or you can't buy a ticket before it sells out – and it will), check out some of the Beer Diaries archives, including other Austin favorites like Thirsty Planet, Jester King, Austin BeerWorks, and more.

Beer Diaries premieres tonight at the Alamo Drafthouse Village, 7:30pm. The price of admission includes a three-beer flight hand-picked by the brewers, which means the event is 21 and up. Visit the Drafthouse website for tickets and more information.