'Somebody' Gets a Hometown Welcome

There was nothing unclear (or uncular or avuncular, for that matter) about the audience's adoration for Somebody Up There Likes Me at its opening night at the Violet Crown Cinema last night.

And, of course, it didn't hurt that writer/director Bob Byington and star/producer Nick Offerman were in attendance. 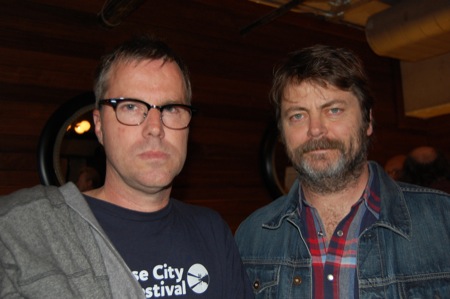 "Can you believe they have ottomans in the goddamn theatre?" Offerman mused before the showing, setting the tone for the riotously wry couple hours ahead.

(The film is at once whimsical and deadpan, comedic and tragic, a coming-of-age and wholly immortal, and you should read more about it in our review. But suffice it to say these two are storytellers with incredibly dry senses of humor, so we were in for a treat in the Q&A that followed.)

Somebody received a few grants from the Austin Film Society during production, and it premiered at the 2012 South by Southwest Film Festival, which would already make this week's Austin release a homecoming of sorts. Add in the fact that Byington calls this town home, and that the film was shot here – including recognizable shots at the airport, Justine's Brasserie, the Mueller development, and, indeed, the very theatre where we sat – and it becomes impossible not to root for the home team. 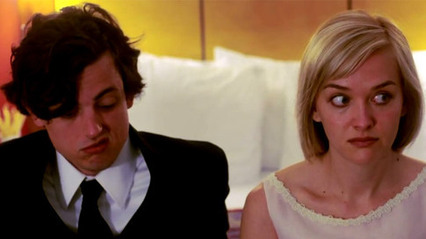 Keith Poulson and Jess Weixler in Somebody Up There Likes Me

AFS sponsored the evening, proceeds of which benefited the newly rechristened AFS Grant (formerly Texas Filmmakers' Production Fund), and the society's Holly Herrick shepherded the Q&A after the screening.

How many of the answers were completely improvised by Offerman? We may never know. Take this one, for example:

When asked how he came up with the concept for the story, Byington deflected, saying he figured "most people are here to see Nick and hear him tell jokes," so Offerman launched into an origin story in which "Bob woke up one day in a house that was not his own," looked out on a swimming pool, was struck by creative ideas, inspired by nostalgic notions about his own father, and forced to write early in the morning with modem unplugged so he could better tap his creative energies. Byington: "That's 100 percent accurate." 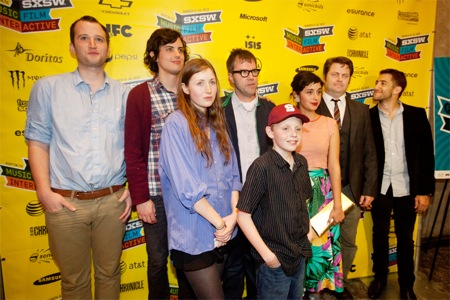 Offerman also may or may not have exaggerated an anecdote in which he left the Sin City premiere in tears, and/or his role of waggling his fingers in front of a lighting instrument to make it look like a film screening (or was it Midnight in Paris after all?). He did finally cop to "being somewhat facetious for humorous effect" when someone asked if he was truly irked by having smaller roles in two previous Byington works, so really, there's no telling.

But these things we're pretty sure are sincere: 1) The two first collaborated on 1999's Treasure Island and they "appreciated each other's love of language." 2) Offerman suggested he's "there to be one of the colors the artist paints with" and casts himself as a lovely shade of chartreuse. 3) The two are investigating a vehicle for that "gorgeous stack of curves that played the therapist" (Offerman says of Megan Mullally, to whom he is married in real life).

And, really, if nothing else, this we know to be true: Somebody is finally home, sweet home.

READ MORE
More Somebody Up There Likes Me

Poker Face
The life cycle of man as deadpan farce