‘Game of Thrones’ Gets a Dowager Countess

And other non-spoilery bits about Sunday’s season 3 premiere

When it comes to labeling HBO’s epic series Game of Thrones, “fantasy” isn’t a misnomer – its call sheet, after all, includes dragons and sorcerers and third-eyes on two legs – but part of what makes GoT so addictive is its bleakly real illumination of humanity’s worst inclinations. 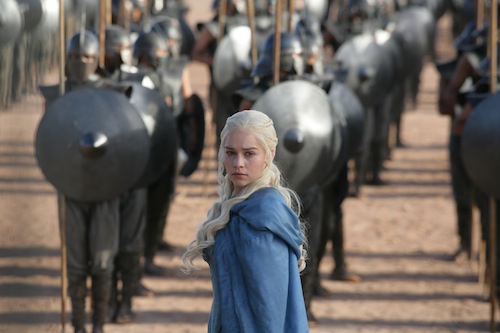 Season 3, which debuts Sunday night, continues to (rather delightfully) dirty its boots with so much muck-and-yuck. Warmongering? Check. Blood feuds? Yep. Sudden, shocking betrayals? Sure thing. It’s no surprise that, with so many clans at one another's throats, a stranger would sooner cut your hand off than shake it, but in Westeros, there’s a good chance your own family would step on your head just to scrabble one crummy rung up the ladder to power. Just ask Tyrion Lannister (Peter Dinklage), arguably the beating heart of the whole series: His dad, the newly named Hand of the King Tywin Lannister (Charles Dance), refers to his youngest as “that lecherous little stump” – and that’s borderline-affectionate, considering Tywin’s open, spittling hatred for his son.

So what’s new with Season 3? If you’ve been following George R. R. Martin’s in-progress source material (he’s currently writing Book 6 of the Song of Fire and Ice cycle), or even if you’ve just lost long hours rabbit-holing through the Game of Thrones wiki, you know some big, bloody stuff is coming down the pike. But nobody not already in-the-know wants that spoiled, so here are some Season 3 developments, minus major spoilers, to look for.

The Brotherhood Without Banners

With so many houses to keep straight – Lannister, Stark, Baratheon, Targaryen, Tyrell – you might be best off cheering for the Brotherhood Without Banners, who pretty much hate everybody (hey, fewer names to remember!). They’re led by Beric Dondarrion (new cast addition Richard Dormer, the scrappy lead of recent SXSW film Good Vibrations) and have an especial dislike for Lannister loyalists. Arya Stark (Maisie Williams) crosses paths with the group, so expect them to have a larger role this season. 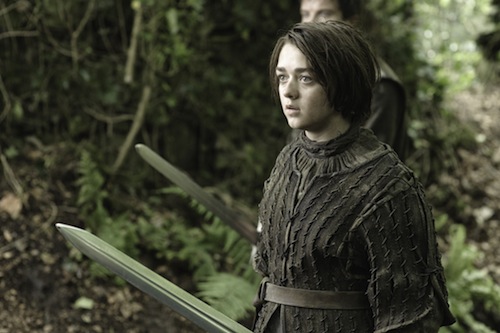 GoT architects David Benioff and D.B. Weiss have deservedly gotten blowback for how many naked lady bits they've put on parade, to no obvious end (there’s even a word for it – “sexposition”). Gratuitous nudity takes a dive in the first episodes of season 3, but what’s on the rise are steely women.

Queen Regent Cersei (Lena Headey) and Daenerys (Emilia Clarke), the Targaryen contender for the Iron Throne, continue to command authority (if in very different ways), and now there’s a new crop of women making power moves. Retired prostitute Ros (Esmé Bianco) appears to be taking over operations at Littlefinger’s bordello, while King Joffrey’s new fiancée Margaery Tyrell (Natalie Dormer) has cannily divined just what gets her future hubby hot: cruelty. After an archery lesson turns erotic, Margaery encourages Joffrey, an amateur historian of the macabre, to give her a tour of dead kings’ burial places and the bloody ways they went out. Turns out the boy-king is as giddy-wonky as a Civil War buff, and the effect is almost endearing. (Almost. Tally again the dead bodies in his wake, and the effect fast wears off.) 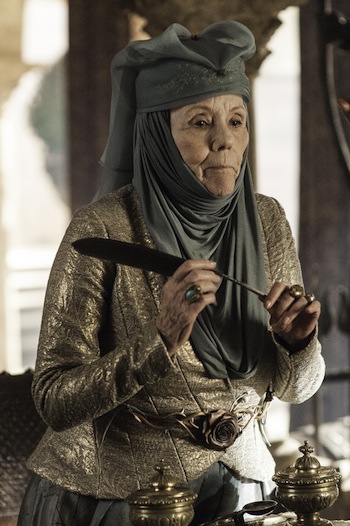 Back on the Chain Gang

Some savvy meme-maker needs to construct a prisoner flow chart, stat. And we’re not talking metaphorical prisoners of love or honor or other capital-letter conditions – we mean straight-up shackling here. Season 3 opens with a passel of prisoners; some of them change hands more than once in the first four episodes previewed to press, and soon even more – too spoilery to divulge – join the jailed ranks.

Following Winterfell’s collapse, Theon Greyjoy (Alfie Allen) finds himself in a medieval torture situation; Tyrion and pretty-but-guileless Sansa Stark are on more or less under house arrest in King’s Landing; Lady Stark continues to be in the doghouse after giving up her son King Robb’s prize prisoner Jaime Lannister (Nikolaj Coster-Waldau); and Jaime, that lovable sister-shagging so-called Kingslayer, is being bullied around the country by Lady Stark’s defender, the almost-giant Brienne (Gwendoline Christie), making an improbable but irresistible duo that’s sure to be the next great TV ’shipper fetish. 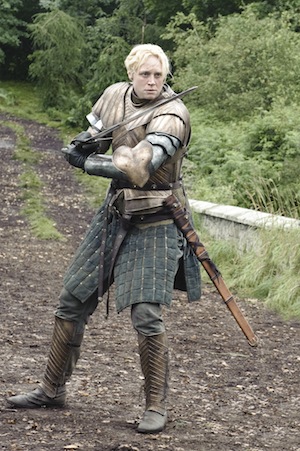 Gwendoline Christie as Brienne of Tarth (photo by Helen Sloan)

• Say what you will about righteous claims to the crown, but 99.9% of the time, revenge is the real motivating force here, firing everyone from Arya to Tyrion to Spymaster Varys the Spider (Conleth Hill); the latter gives a whopper of a speech spelling out exactly how he came to be a eunuch and just how much hate in his heart he still has for his tormenter.

• Those new faces join an already crowded field of players, and the first two episodes are more about getting our bearings. Adrenaline-junkies itching for go-big episode exits may look askance at the more contemplative build, but be patient: Game of Thrones earned its devoted and ever-expanding fan base in part by perfecting a visceral connection between audience and material. By episode 3, we’re back in holy shit did that just happen!! country.