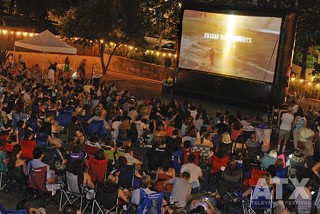 Time to drag yourself away from the idiot box: The ATX Television Festival has confirmed the lineup for its long-awaited Boy Meets World reunion, plus a rare screening of Richard Linklater's 2004 pilot for HBO, $5.15/Hr.

We've known about the Boy Meets World reunion since last November, but we didn't know who would be coming. Now the festival staff confirm that show creator Michael Jacobs will be joined by original cast members Ben Savage, Rider Strong, Matt Lawrence, and Maitland Ward. The festival organizers are also promising more special guests (fingers crossed, Danielle Fishel, Danielle Fishel, no whammies, no whammies). Strong, who played Cory Matthews' best friend Shawn Hunter before meeting a sloppy end in the Cabin Fever movies, said: "Boy Meets World ripped away my childhood and ruined me as an adult. Wait, reverse that."

Last year's inaugural event was a welcome change in Austin's wall-to-wall film festival calendar, with panel highlights like Cougar Town/Scrubs creator Bill Lawrence at the Stateside. It was enough of a success that ATX 2012 veteran Jane Espenson returns to talk about ABC's Once Upon a Time, and this time she has series co-creators Adam Horowitz and Edward Kitsis in tow. They'll be sharing the schedule with creators and cast from shows including The Vampire Diaries and TNT's alien invasion drama Falling Skies.

Also in that "never got a chance" crowd is Jack Black's bizarre 1999 Knight Rider spoof Heat Vision and Jack. There will undoubtedly be the biggest local interest in Linklater's minimum-wage comedy $5.15/Hr. The local filmmaking icon dipped his toe into TV waters with this forgotten pilot, but ultimately tested a lot of what he was talking about in Fast Food Nation two years later. And, of course, it would not be ATX on TV if there wasn't a Friday Night Lights event.

Cable is definitely paying attention this year. AMC is bringing cast and crew from hard-hitting period railway drama Hell on Wheels, as well as their upcoming Detroit-set adaptation of critically lauded 2006 British cop drama Low Winter Sun. The CW will be here mob-handed too: Along with Vampire Diaries, they'll be showcasing Hart of Dixie.

Not that the networks will be staying home. Fox will be supplying talent from its Sunday night Animation Domination strand, the recently renewed The Mindy Project, plus a promise of folks hand-delivering an episode of New Girl No word on who will be attending for the Zooey Deschanel vehicle, but Jake Johnson seemed to enjoy his visit for Drinking Buddies during SXSW.

ATX Television Festival runs June 6-9. Details and badges available now at www.atxfestival.com. Here's a full list of the confirmed shows and guests for the screenings and Q&As.