The perfect introduction to Robert Bresson 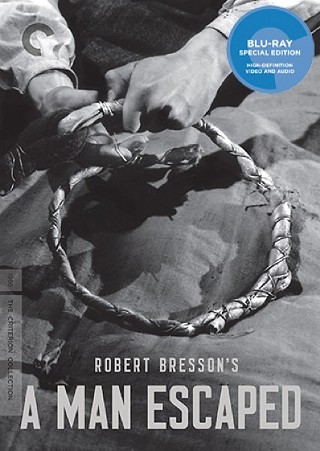 The films of Frenchman Robert Bresson, the great postwar filmmaker known for his minimalist visual style and transcendent spiritual imperative, are not always inviting to first-time viewers.

Bresson had a reputation for austere filmmaking that used only cinema’s most essential elements. His Catholic existentialism invoked characters locked in internal struggles to find faith or resignation, and he regularly used nonprofessionals, whom he called "models" rather than "actors." All that can prove off-putting to the casual viewer who’s only heard of Bresson’s legendary status but sees little onscreen that announces in big, dramatic flourishes that the audience is in the presence of profoundly cinematic artistry. For these reasons, his 1956 film, A Man Escaped, is a perfect entry point for newcomers to Bresson.

A Man Escaped (Criterion Collection, $39.95 [Blu-ray], $29.95 [DVD]), at its most elemental, is a grippingly taut drama about a prison escape by a French Resistance fighter from a Nazi detention center where his execution is an almost certain eventuality. Except for shots at the opening and closing of the film, all the action takes place within the confines of the prison walls – and most of it within the interior of the tiny cell that houses the protagonist Fontaine (François Leterrier). The story is based on a published recollections of André Devigny, a decorated French lieutenant who escaped from the Fort Montluc prison camp in German-occupied Lyon in 1943. Although A Man Escaped is not a precise rendering of Devigny’s mode of escape, it does reflect its source material through an extensive use of voiceover to convey the character’s detailed planning and execution of his jailbreak. It is a plan that requires not only ingenuity and luck, but also commitment and perseverance in the face of probable failure.

The suspense Bresson manages to create with only a minimum of cinematic elements is breathtaking – and is even more startling in light of the fact that the film’s title essentially informs us in advance that the prison escape is ultimately successful. Criterion's crisp transfer to this Blu-ray disc allows us to see all the gradients in the original black-and-white images: The blackness of the cell, the streaks of dark blood on the white shirt worn day in and day out, the daylight that seeps through a tiny window and peephole, and the gray shadows where the majority of the stealth action takes place all combine to create an exquisitely variegated palette.

Despite a minimum of dialogue, the auditory aspects of A Man Escaped are complex and narratively vital. Fontaine’s voiceover is delivered in a matter-of-fact manner that keeps us apprised of the captive’s mental calculations, but it's devoid of emotion or vocal ploys to garner our sympathy. Offscreen sounds abound: gunshots signaling the execution of yet another prisoner, the footsteps of the guards, the clanking of their keys, a train whistle that beckons in the distance, the tapping on the walls by which some of the prisoners communicate. Yet the sounds within Fontaine’s prison cell are no less critical. These are sounds the prisoner must muffle as his plan comes into focus and he sharpens a spoon into a tool in order to take apart the slats in his cell door and unfastens the metal coils of his bed to make rope and other items. Every creak can mean the difference between life and death, and the role of sound in creating one of the greatest prison-break films of all time cannot be discounted.

I could go on and on, but fortunately this new disc has several informative extras that provide a mini schooling in Bresson. Tony Pipolo, a practicing psychoanalyst who is the author of Robert Bresson: A Passion for Film, contributes an essay in the DVD’s accompanying booklet that is a great starting point for looking at this film and Bresson’s work overall. Two hourlong documentaries feature appearances by the reclusive Bresson, making them real rarities. The first, "Bresson Without a Trace,” is a 1965 episode of a French television program in which the director gives his first on-camera interview. The second, “The Road to Bresson,” records the filmmakers’ attempt to capture Bresson on film, but meanwhile solicits thoughts from such Bresson admirers as Louis Malle, Paul Schrader, and Andrei Tarkovsky at the 1984 Cannes Film Festival, where Bresson was presenting what was to be his final film, L’argent. Also enlightening to any student of the building blocks of cinema is a 20-minute visual essay by film scholars David Bordwell and Kristin Thompson on the use of sound in A Man Escaped.

Bresson’s prison-break movie is a dandy suspense film, an action movie whose activity occurs mostly in the mind and in the heart, and a gripping story in which the tension derives from making things as quiet as possible instead of blowing them up real big.

Union Square (MPI, $24.98)
Nancy Savoca directs Mira Sorvino and Tammy Blanchard in this unraveling drama about two sisters and their tangled past and present. For more on the film, see our interview with Savoca, “Last Course.”

The Comedy (New Video Group, $26.95)
Rick Alverson and Tim Heidecker (of Tim & Eric renown) tell the story of a rich, cynical hipster who uses New York City as his playground. We interview the filmmakers in “‘The Comedy’ Is Not Joking Around.”