Journey doc hits Alamo Slaughter for one night only 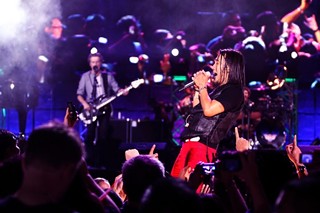 But there's good to come out of it too. After all, there must be a reason Simon Cowell is sourcing his next talent show from YouTube clips.

And while one of the world's most well known YouTube-to-stardom trajectories is that of young Justin Bieber, Arnel Pineda's rise to fame happened first. Meet the new lead singer of Journey. (Yes, that Journey, the iconic rock band Journey best known for its work in the late Seventies and early Eighties.) Described as "David Lee Roth and Bruce Lee put together," Pineda is the remarkable Filipino singer tapped by the band join the gang in 2007.

His incredible story from Third World to world tour is told in Ramona Diaz's Don't Stop Believin': Everyman's Journey, which had its world premiere at the 2012 Tribeca Film Festival and is screening for one night only tomorrow at the Alamo Drafthouse Slaughter Lane.

Check out the trailer here, and remember next time you're goofing around on camera that while you might just inadvertently become the next laughingstock of AFV, others are busy putting the "you" in YouTube.