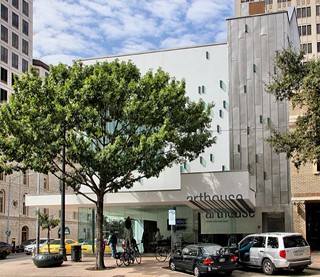 What better place than a Downtown rooftop to absorb films about architecture?

Certainly, the folks at the Jones Center know a thing or two about ambitious gallery designs. But tonight, they invite Austinites to their space for the express purpose of appreciating another space: the Modern Art Museum of Fort Worth, better known as The Modern.

For the third consecutive year, AMOA-Arthouse presents its Rooftop Architecture Film Series, which focuses on "celebrated architects and their innovative projects. In the spring season, the selected documentaries are Making the Modern, about Tadao Ando's designs for the aforementioned Fort Worth project; Kaspar Astrup Schröder's My Playground, which follows parkour enthusiasts Team JiYo and architect Bjarke Ingels from China to Denmark and everywhere in between; and finally, Life Architecturally, which profiles the husband-and-wife duo of Robert McBride (architect) and Debbie Ryan (interior designer).

Stop by tomorrow and check out the view, and stay tuned for updates on the rest of the season.

Making the Modern screens tonight, 8pm, at the Jones Center Rooftop (700 Congress). The Rooftop Architecture series is free for members and $10 for nonmembers; tickets are available at the door. Attendees can bring picnics or purchase snacks from Royal Blue Grocery on the roof (cash only).