DVD Watch: ‘The Life and Death of Colonel Blimp’

Imagine if someone took, say, Yosemite Sam and pushed through his hair-trigger temper and buffoonery to make a flesh-and-blood, aching human out of so much cartoonishness. Now meet Colonel Blimp. Colonel Blimp was a 1930s British comic-strip creation of David Low meant to lampoon the establishment. A pompous blowhard too attached to old-fashioned codes of conduct, Blimp is an enduring figure in his native England but little-known here, which surely has contributed to how underseen The Life and Death of Colonel Blimp is in America. Indeed, the Archers – the filmmaking collective that was director Michael Powell, screenwriting Emeric Pressburger, and a tight coterie of creative collaborators – has never gotten the respect or recognition in America that its genius oeuvre deserves. No lie: These guys made some of the greatest movies of all time. (Read more on the Archers, and especially their post-war masterworks The Red Shoes and Black Narcissus, here.)

Another reason for The Life and Death of Colonel Blimp’s relative obscurity in the States: The version that kicked around television for years was a 90-minute cut – a shocking 73 minutes hacked off the running time – that rearranged the film’s crucial flashback structure into a chronological plot. That’s the version Martin Scorsese first saw, as he recollects in a video introduction on the Criterion Collection’s brand-new release (Blu-ray, $39.95; DVD, $29.95). Scorsese would later become close with Powell, and his Film Foundation has been instrumental in the effort to restore the Powell and Pressburger catalog.

(And on the subject of the Criterion release: There’s no complaint to be made about the restoration – the Technicolor is downright luxurious – but one wishes the distributor hadn’t been so chintzy with the extras: a single disc; documentary, audio commentary, and photo galleries recycled from the DVD put out in 2002; and of the new material – the Scorsese intro and an interview with Thelma Schoonmaker Powell, Scorsese’s film editor and Powell’s widow – many of the same anecdotes understandably overlap.)

A pompous blowhard too attached to old-fashioned codes of conduct, Blimp is an enduring figure in his native England but little-known here, which surely has contributed to how underseen The Life and Death of Colonel Blimp is in America. 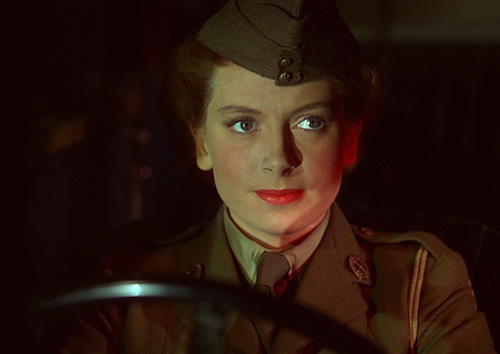 Deborah Kerr in 'The Life and Death of Colonel Blimp'

The film opens at the end of the career of military lifer Maj. Gen. Clive Wynne-Candy (played by Roger Livesey), the picture’s Blimp proxy. Forcibly retired from active duty, Clive now leads the Home Guard. A few hours shy of a military exercise meant to simulate a home invasion by Nazis, Clive takes a breather at a Turkish bath. When the Home Guard strikes preemptively, he’s aghast that his men aren’t playing by the rules (“War starts at midnight!” he insists). “Clean fighting, honest soldiering” – that’s how the gentlemanly Clive thinks wars should be conducted. The film then jogs back to 1902, to Clive at the outset of his career, and wends its way through three wars (Boer, World War I, and World War II), a friendship for the ages between Clive and a German soldier named Theo (the magnificent Anton Walbrook, playing a part close to the heart of Pressburger, a Hungarian emigré), and three iterations of the same spirited, feminine ideal (each played by Deborah Kerr, who was only 20 at the time). 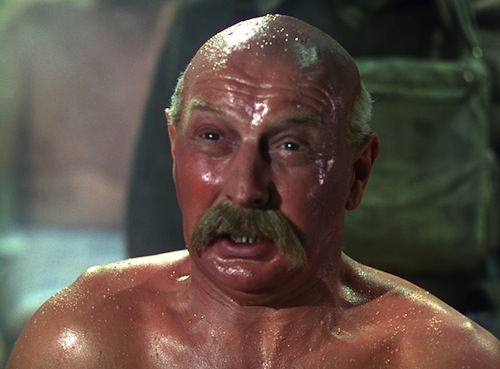 Roger Livesey in 'The Life and Death of Colonel Blimp'

Powell and Pressburger initially wanted Laurence Olivier for the lead. The British War Office wouldn’t okay Olivier’s release from active duty (they didn’t like the script). And very lucky for us – Sir Larry’s frosty beakishness would have invited scorn, not sympathy, for Clive. Livesey brings galumphing good cheer and that endearing frog voice to the part, for a complicated portrait of an uncomplicated man: His Clive is honorable but myopic, open-hearted but inflexible. In the beginning, he’s a ludicrous figure – fat, walrus-mustached, caught literally with his pants down and wearing only a bath towel. Three hours later, the caricature has bloomed into something much greater, and the true weight of the man is understood.