Get to the Bottom of 'Top of the Lake'

Top of the Lake, the new project from director Jane Campion (The Piano, Bright Star), premieres tomorrow on the Sundance Channel. It's a very long film-turned-miniseries about the hunt for a missing girl in a remote area of New Zealand, but the plot isn't the only curiosity of this new series.

In the bucolic New Zealand countryside community of Laketop, 12-year-old Tui Mitcham (Jacqueline Joe), walks neck-deep into the freezing lake. From its earliest moments, Top of the Lake casts an almost Lynchian air of foreboding menace: Is this girl about to become another Laura Palmer? Not quite, and there’s a twist: The girl is fished out of the lake and is discovered to be nearly five months pregnant. And after her father (Peter Mullan), a local crime lord and all-around heel, finds out, she disappears.

Robin Griffin (Mad Men’s Elisabeth Moss, who nimbly asserts herself as the alpha dog), back home visiting her cancer-stricken mother, is the detective called upon to take the case. She’s disappeared, too, to Sydney, where she’s been avoiding dealing with a damaged past that involves Matt’s son and Tui’s half-brother, Johnno (Thomas Wright). Elsewhere, in a thread that doesn’t quite untangle in the series’ first three hours, Holly Hunter plays the androgynous leader of a New Age-y group of wayward women who have set up camp inside shipping containers on the outskirts of the Mitcham property.

From the outset, Top of the Lake possess many of same elements of Veena Sud’s AMC drama The Killing, also about a missing girl and the flawed female detective searching for her. They even possess the same grey, washed-out hues, a similar gloom and doom to the investigative proceedings. But where The Killing got caught up in red herrings and scenery chewing (there’s plenty of that here too, though Campion comes out with the upper hand with gorgeous roaming shots of New Zealand), Top of the Lake keeps the central mystery in relative focus – Campion is as determined as Robin to figure out what the hell happened to Tui. Robin’s a sort of a spiritual little sister to Helen Mirren’s Jane Tennison in Prime Suspect: She’s high-strung and in over her head, but she's gutsy and has a hard edge. Elisabeth Moss is hard to look away from; her eyes telegraph some higher-functioning brilliance that makes Robin’s underdog-faking-it-as-pro act all the more enticing.

Campion sets up a nice, buggy community of shifty-eyed weirdoes for Robin to bounce around in: The Mitchams, a slithery clan of face-tattoos and naked-body ecstasy trips, make being a family seem like it can be as sinister as it is loving.

Even though it wraps up in the short span of seven, one-hour episodes, Top of the Lake is not a tightly wound thriller – it’s about as languidly paced as the New Zealand countryside is vast and beautiful.

At its Sundance debut – just a few weeks before Netflix’s grand experiment in modern TV watching, House of Cards, where the entire season was released all at once online – all seven hours were screened in one sitting. But as it’s planned, the Sundance Channel will be airing the series like old-fashioned TV: week-to-week.

In this age of novel-like storytelling on the small screen, sometimes the binge-viewing experience makes stories like Top of the Lake’s tighter, addictive, and searing. It'll be interesting to see how the elongated broadcasting schedule will affect Top of the Lake’s narrative thrust, because after taking in a few hours in one go, I didn’t want to stop — this is a mystery thriller that’s designed to dazzle you in a large burst. A viewing experience suggestion: Bank a few episodes and watch them a few at a time. Because even though Campion’s drama can feel like a slow burn, it doesn’t take long to build up to a fiery storm.

Top of the Lake premieres Monday, March 18, 8pm CT, on the Sundance Channel. 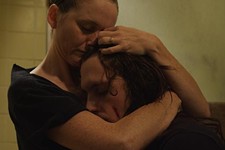