His labor of love 'Much Ado About Nothing' screens today 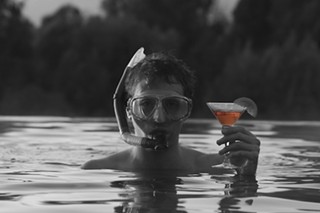 The Chronicle recently spoke with Joss Whedon about Much Ado About Nothing, which has its U.S. premiere at SXSW today. Our print version Q&A came out Thursday, but we had so many outtakes we couldn't resist running them here.

Austin Chronicle: For which of its parts did you first fall in love with this play?

Joss Whedon: For its comedy. My first experience of it was a production of it in London when I was in high school. I was just flabbergasted by how flat-out funny it was and not just the clowns but the purported heroes.

Austin Chronicle: And were there other things about it that kept you coming back to it through the years?

Joss Whedon: Obviously, I saw the Branagh film, which I thought contained a couple of great performances. And then we read it at the house, and it was those particular actors who took it to the next level for me. But it really wasn’t until I sat down and said, “If I was going to make a movie about this, what would it be about?” that I said, “Oh, it’s all the other people that are making this click along.” I realized what a coherent and specific work it was and also what a great ensemble piece. I think too often it’s played as a two-hander, and it’s so much more than that.

Austin Chronicle: Something that’s always struck me about Much Ado is that it’s about community more than almost any other Shakespeare play. When I watch a good production of it, the sense that these people have a shared history comes through very strongly. That seemed to inform the performances in your film of it. Was that something you were conscious of in making it?

Joss Whedon: Yeah. It isn’t a bunch of introductions. Everybody knows who the players are. We meet them in mid-relationship. So there’s this intimacy of happenstance, where it’s like you just walk in on a party, and that to me is a great way to get into it. And it does reflect that most of these actors knew each other already in some capacity and had a simpatico [relationship].

Austin Chronicle: It occurs to me that in both Much Ado About Nothing and The Avengers, you also have a certain segment of your audience that has a deep familiarity with these characters and their histories and may be coming to your film with great expectations. Were you ever thinking about the diehard fans of either Marvel or Shakespeare in making these films?

Joss Whedon: When it comes to Avengers, I never really worried about that, because I’m one of them. I’m a fan, and I felt like I would service the fans, and the question was really: What about the people who aren’t? Much Ado is a little different, because I didn’t know how the people who live and breathe Shakespeare would respond to it, whether they would think it was an interesting new production, a grand reinterpretation, a very faithful one, a travesty, … I don’t know that community as well, although there are plenty of people who are in both communities. I think there’s this sort of weird false separation that if somebody likes comic books, then they must not be smart enough to like Shakespeare.

Austin Chronicle: Well, if you ever read Stan Lee’s Thor, then you were raised on faux Shakespeare.

Joss Whedon: Exactly. And I had a great time writing faux Shakespeare and making fun of myself doing it in The Avengers. With The Avengers, I was reaching out to everybody. I always am. But at the same time with Much Ado, this was a statement of love for the text and the troupe that I could risk not being everybody’s cup of tea.

Austin Chronicle: Would there be another Shakespeare play that you would want to put on film if the opportunity presented itself?

Joss Whedon: Yeah. I mean. There are other things I would love to accomplish, but doesn’t want to do Hamlet? Hamlet and Twelfth Night are probably the two contenders. But what you said about Much Ado is true and relevant. It’s this one group of people. It’s contained. It’s also contained in one location, which, apart from being extremely useful for a microbudget studio – especially if you live on it – is that it has a visual coherence that comes with the package. So the house you’re in is going to dictate the feel of the thing in a way that means you’re not searching around for it. It feels lived in. The house literally was, and the movie feels that way, too, and that also gives it this coherence in the same way that the troupe brought that.

Joss Whedon, Much Ado About Nothing, The Avengers