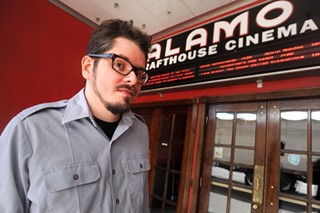 Wednesdays have always been Lars Nilsen's day, and today is no exception: The Austin Film Society has just announced that the Alamo Drafthouse institution and Weird Wednesday has joined their programming team. And it's a big Wednesday for AFS too, as they sign a new deal with the Marchesa Hall & Theatre.

The doyen of trash cinema (and we mean that in the most reverential way possible) recently announced that he was stepping away from the Drafthouse after a decade and a half. Now he brings that encyclopedic knowledge of film arcana (and the skills to get the lost and abandoned back on screens) to the AFS programming team. "We’re going to have fun!", he wrote in a press release today. "Austin is already one of the movie capitals of the world and with a little luck and a lot of hard work the years ahead will constitute a golden age of filmgoing for our community."

Calling Nilsen one of the Austin film community's "most cherished and gifted curators", AFS artistic director Richard Linklater said, "This is a very special moment for AFS, and we look forward to working with Lars to continue the exceptional programming he has offered for years at the Drafthouse."

And don't worry, insomniacs and lovers of z-grade cinema: Nilsen will continue to host Weird Wednesday and help the Drafthouse in an advisory capacity.

As for the new agreement with the Marchesa, with a new Dolby sound system and 35mm projector, it will become the new home to AFS Cinematheque at the Marchesa, the society's archival film programming and special series. This will expand upon the existing relationships AFS has with the Drafthouse and Violet Crown (plus, with Austin Studios expanding and considering new screening rooms, the society's future as an exhibitor is looking pretty rosy).

For more info on the AFS, visit www.austinfilm.org. Tickets for the AFS 20th anniversary screening of Dazed and Confused are available now.