Parade’s End, an adaptation of Ford Madox Ford’s four linked novels, already aired in Britain last summer, but HBO was smart to hold the U.S. premiere until tonight: It’s been a whole week now since Downton Abbey season three went dark and audiences haven’t settled yet on where next to get their period kicks. The five-part miniseries, which runs tonight through Thursday, doesn’t target the exact same pleasure spots as soapy Downton. Though they share a setting – England before and during WWI – and a preoccupation with the increasing antiquity of the to-the-manor-born codes of conduct of the ruling class, Parade’s End is a more challenging work, at once sumptuous and intellectually rigorous. Sure, it bears the same scandal-riddled fruit of infidelity and betrayal, suicide and society snubbing, but it doesn’t pulp that fruit. Indeed, Parade’s End doesn’t strain to ingratiate itself – I wasn’t sold on it until the second episode – but its rewards are more satisfying for being harder won.

Benedict Cumberbatch (Sherlock) stars as Christopher Tietjens, a well-born government statistician with sharp opinions and an unbending moral code. He’s made a disastrous marriage to the untamable, Catholic socialite Sylvia (Rebecca Hall), whom he hastily marries when she becomes pregnant (it’s an open secret the child may not be his). Sylvia craves excitement and the male gaze, while Christopher likes to unwind by correcting the encyclopedia (one can imagine Cumberbatch’s egghead-nudnik Sherlock enjoying much the same). Their marriage strains even further when Sylvia’s wandering eye speeds to full gallop and Christopher meets a young suffragette, Valentine (Adelaide Clemons), whose intellect and ideals align simpatico with his; still, Christopher’s Toryism – ie, God, country, and a stiff upper lip – immobilizes him, to the frustration of both women. 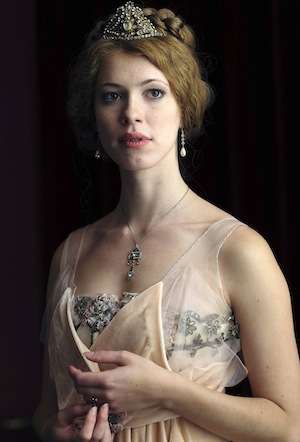 Director Susanna White, who won a BAFTA for her work on Bleak House, assembles the parts with confidence and even sophistication (even if she does lean too hard on a kaleidoscope motif), while writer Tom Stoppard (Shakespeare in Love, Anna Karenina) adapts with signature wit and complexity. The three leads are all compelling, but it’s Hall (The Town), so often cast as all softness and sweetness, who runs away with the thing. She’s frightfully good as the scheming Sylvia, a character who begins the series about one immaculately gloved finger away from uncut malevolence and then unfurls over the next five episodes into a multilayered and sympathetic figure. Pretty sure her base layer is still wickedness, though.