'Face Off' Recap: Quit Bugging Me 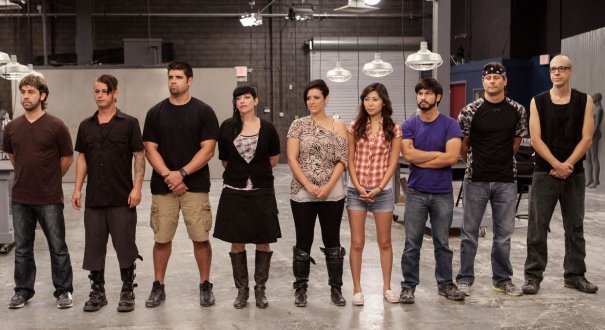 The ever-shrinking crowd: The last remaining contestants on season four of 'Face Off' (Image courtesy of SyFy)

Mirror, mirror, on the wall, what's the challenge on Face Off to which one will fall? We've had monsters all this season, so the most recent challenge is the upsetter: Recreate a fairytale princess. "Not my strong point," bemoans the last Austin contestant, Eric Z.

Yeah, sadness on SyFy's special make-up effects show. We started with three locals, and they're all falling, snap, snap, snap. First Michael Faust went (very unfairly) and then Jenna Green left (rather tragically). But with the foundation challenge, he has a little bit of a shot, because it's (yeah, you guessed it) fairy tale princesses gone bad!

Could we be more predictable? How about something that's not monstrous? I mean, I know this is me talking, and I have never met a creature I wouldn't feature, but I miss challenges like season two's body paint challenge. It was different, it switched up the dynamic, and it highlighted some oft-forgotten skills.

We finally get a quick promo for the folks from series sponsors Make Up For Ever. Oh, boy, do we get a promo. The entire foundation challenge is just a lengthy name-check session for the firm, and Eric F. (aka Goth Combover) wins again, with immunity and two grands' worth of Make Up For Ever makeup. Did we say that the show was sponsored by Ma … oh, forget it. On to the main challenge, and it's a beauty … oh no, it's not. Bug-human hybrid.

There are two approaches to the challenge: The Fly or The Mothman Chronicles. It's either a human that is transforming into a bug (oh, those crazy scientists) or a bug that looks like a human. The first can be utterly asymmetrical, while the latter needs to look like a real creature. At least there's a subtle twist, where the emphasis is on the texture of the creature, not the structure. 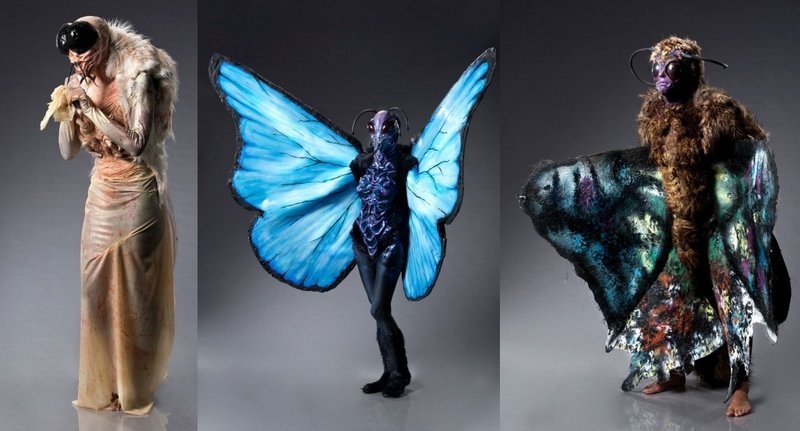 Kris: What's a Blue Morpho Butterfly without wings? Stable, supposedly. Kris is ambitious, as always, but in a restrained way, and the silhouette of the wings is gorgeous. The chest sculpt may be his best work to date.

Wayne: The most workmanlike talent came second in the foundation challenge, and his firefly has a great extended head and glowing tail. Of course, dingus treads on his own talent by leaving several pieces at the lab.

Autumn: Great sculpt of her beetle head, even if it all comes across as a little Babylon 5.

Eric Z: It's not perfect, and there's more mask than make-up, but Eric Z's blood-bag-sucking mosquito is genius, if only for how he turns the fuzziness into a fur coat to make her a kind of socialite. There was potential for an interesting 1% reference, so that was a minor lost opportunity.

Eric F: Good thing he had immunity, because his Desert Wolf Spider is kinda meh.

House: The dark horse contender goes down the Revenge of the Fly path of genetic fusion for his honey bee, but it's really nothing we've not seen before. As he sighs, "It's nice, but it's not extraordinary."

Megan: Smart start: She actually does some research on the Sunset Moth, but then self-sabotages by not knowing when to say 'stop' with the paint on the wings. "He looks like Chewbacca and a moth made a baby," she whinges, and I think that's generous. It's more like a stink ape rolled in glue and jumped in Stevie Nicks' scarf pile.

Alam: Public record that I'm not her biggest fan, but the mold for her grasshopper mask is gorgeous (if a little, well, Kamen Rider. Unfortunately, when she applies it, it because the definitional hot mess. When she gets up in front of the judges, they quickly note what everyone else did: That nothing melds.

Antony: A bad week for the one-time leader, because he's just not inspire by his namesake, the ant, and he ends up so far behind that, coming off the floor, he could be heading into the bottom looks. When judge Glen Hetrick starts talking about Teenage Mutant Ninja Turtle texture", it's damning.

And the winner is … it should be Wayne, but he forgot to include the texture components, so Kris wins by default. So while Kris is now firmly stuck in the upper echelons, at least Wayne is proving the to be a stronger contender who just needs more confidence.

And it's Alam going home, Frankly, last of the chaff. Bad as Megan's final product was, I still think she has the potential to pull out a Wayne-style revival. As for Anthony, hopefully this bottom three place scares him into producing something extraordinary. 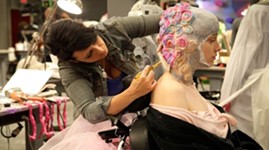