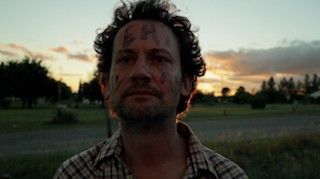 It is almost too obvious to state that Marfa is both a place of being and an act of imagination.

It is a George Herriman (Krazy Kat) landscape, a kind of desperate and accentuated wilderness that while being occupied is also aesthetic and desolate, inviting and foreign. The inhabitants are regular West Texas residents inter-spliced with people out of the casts of Sixties independent films. There is almost no eccentricity to Marfa because it is all so eccentric.

Cory Van Dyke's Far Marfa captures those contrasting and intermingling streams of reality and mythology, the abstract and the resonant. It is a layered film - a human comedy and a metaphysical mystery as well as a consideration of art and romance. Meditative, generic, and occasionally exuberant, it is a cinematic celebration of all things Marfa.

Carter (Johnny Sneed) is a music producer whose one success was some time back while his future is all dreams. He runs across an eccentric talent driving a truck who turns out to be a famous artist who gives him a painting. Just as Carter discovers it to be a long-thought-lost masterpiece, the painting disappears.

Carter begun the film losing his girlfriend Becka (Julie Mintz) to David (Jesse Bernstein); he then intensely connects with Quarry (Jolyn Janis), a new female friend in what they both insist is not a romance.

The rest of the film is a winding narrative, a meta-mystery that follows the trail of the missing painting through the landscape of Marfa and the lives and actions of its residents.

The leads are great. Sneed and Janis are both outstanding, being whimsical and mimetic, fantastic and realistic. Both their roles demand a complex and unusual range of thoughts and reactions with both of them delivering the goods and then some. I can't imagine we won't see more of these two in the future no matter how much I hate to write or read that kind of sentiment in a review.

The score by the ubiquitous and extraordinarily gifted Graham Reynolds has to be acknowledged. As does the cinematography of Iskra Valtcheva.

The landscape, texture, sensibility, and atmosphere of Marfa is what really makes this film so captivating and unique. All of this so sweetly comes together under the skilled and visionary hand of writer and director Cory Van Dyke.

This highly recommended film make its Austin premiere tonight (2/25) as part of the Stateside Theater's new Stateside Independent series; the screening is copresented by the Austin Film Society and the Texas Filmmakers Network. The 7pm show is sold out, but tickets are still available for the 9:30pm show.