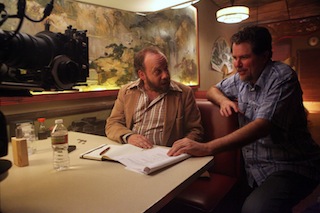 "Call it existential-surrealist horror, and you're halfway there," said the Chronicle's Marc Savlov in 2000 while describing the Phantasm horror series. The occasion was Phantasm-ania at the Alamo Drafthouse.

At Phantasm-ania all four films in the series would be shown back-to-back with the director Don Cosacarelli, and stars, Angus Scrimm and Reggie Bannister, in attendance – an event I likened in my preview to the "cult horror equivalent of the Holy Grail."

The 1979 original Phantasm is a garishly inventive cult classic of severed body parts and mysteriously lethal silver spheres. The horror film had three sequels, although there was a nearly 10-year gap between the release of Phantasm and Phantasm II, a film that really upped the ante on the original. The screening of Phantasm II at Phantasm-ania (which was co-hosted by Austin screenwriter and artist Stephen Romano), was the first time the film had been shown onscreen since its initial release in 1988. In fact, all the prints for the event came from from Coscarelli's private collection.

In addition to our review of Don Coscarelli's latest bizarro film, John Dies at the End, which opens in Austin today and is also available on VOD, and our interview with the horror auteur, we'd like to point you toward "Spheres of Influence," the threeway interview Marc Savlov conducted in 2000 with Coscarelli, Scrimm, and Bannister in advance of Phantasm-ania.