From the Vaults: LaGravenese Gravitations

Richard LaGravenese enters the YA fray with 'Beautiful Creatures' 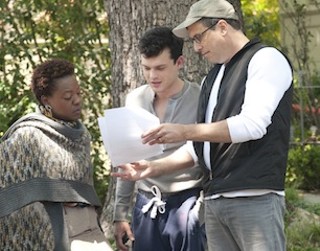 Richard LaGravenese is the writer and director of Beautiful Creatures, the film that opens today with the hope of launching a new supernatural-teens-in-love franchise (à la the Twilight films). An award-winning screewriter, LaGravanese received the Distinguished Screenwriter Award at the 2002 Austin Film Festival, where he is a frequent attendee.

LaGravanese wrote the screenplay for Beautiful Creatures, which was adapted from the first book of Kami Garcia and Margaret Stohl’s YA book series, Caster Chronicles.

Beautiful Creatures is LaGravanese's fourth fiction film as a writer and director. The other three are Living Out Loud, Freedom Writers, and P.S. I Love You – none of which have received terribly strong critical reactions.

LaGravanese will probably always be best remembered for his second produced film as a screenwriter: The Fisher King, an original screenplay that was marvelously realized by its notable director Terry Gilliam and outstanding cast (Robin Williams, Jeff Bridges, Amanda Plummer, and Mercedes Ruehl – who won an Oscar for her performance). His next screenplay for the dark comedy, The Ref, is pretty memorable, too.

Years of adapting others' works into screenplays has given LaGravanese the experience to mold Beautiful Creatures into a smart movie that also incorporates all the dopey stuff about love affairs between mortals and witches. Some of his other film adaptations include A Little Princess, The Bridges of Madison County, Unstrung Heroes, The Horse Whisperer, Beloved, and The Mirror Has Two Faces (which is an adaptation of a French film).

Click on any of the links above to read The Austin Chronicle reviews.