Face Off Recap: Bad For Your Gums 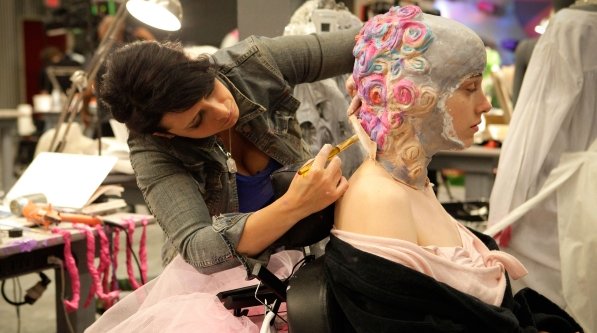 It's been a couple of weeks since we had a foundation challenge on Face Off, and I kind of miss them. It's like leaping to dessert without at least hors d'oeuvres.

So it's nice to have an immunity challenge this week and, double plus A1 supergood, it's finally something that the unstoppable Anthony isn't automatically going to win: A bearded lady challenge. Hair is tough (explaining the wealth of bad toupee gags out there), but then it could be a surprise upset for Eric F., who claims he can't keep his own hair under control. Seriously, dude, just get the weird plastic dome thing from The Fifth Element and complete the transformation into Zorg.

So, challenge accepted, and this is a skill set with which many effects people struggle. There's a lot of pink fluff and weird colors, but there's a big difference between a woman with a beard and a bearded woman. When it comes to designing a complete look, it's a great showing for CenTexian Jenna Green, who successfully creates an "Irish-burlesque carnival feel." But it's no surprise that our own Eric Z. (go #Team512!) wins the challenge and immunity. Yeah, it wasn't the flashiest, but it looked like a real beard, and this is a skills test.

And so, this raises the question for the spotlight challenge. Will it be about subtlety, maybe another aging application? Nope, it's a candy creature creation, aka this season's version of the Tim Burton challenge. Yup, it's Augustus Gloop time, but it creates some interesting possibilities for an upset. The first few challenges were grim and ghoulish, so this provides a pik'n'mix of opportunities. Will the contestants go tooth-rotting grotesque or fairy-tale sickly?

Talking about sour treats, Autumn continues to be the worst competitor ever. And, I know, this is all down to the editing, but if you don't know how to avoid looking like a dismissive sociopath in front of the cameras, then don't get in front of a camera. Lazy, annoyed, annoying, and treating the whole thing like it's beneath her. Worst of all, she's happy to be in the middle of the pack. Meanwhile Wayne seems a little shocked and even disappointed that he's not been dumped like stale Candy Corn yet, so he seems a little more motivated. I'm going to call him Zen Wayne, because, as everyone else is diving into the candy pool and carving on a Pixy Stix high, he's staying hydrated and mellow. Remember, kids, sugar crashes and latex don't mix. 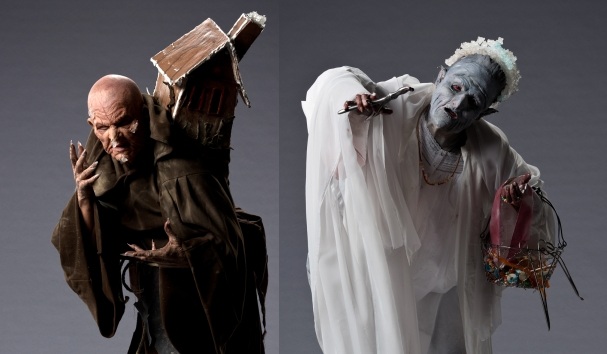 House's jelly-belly monster is cute and nasty. That it's been in every season trailer so far made it a shoo-in for a top three slot, but that's mainly because of the daring mouth-stomach. The incomplete paint job, plus the rough head sculpt, do him few favors.

Anthony nails it when he describes his colonial candygram colonel as like it stepped straight out of a cartoon.

Eric F. grotesque concept of a molten gummy bear junkie is more a prop than a costume. Still cool, though.

Eric Z.'s Babb Yagga is light on the actual candy, but the gingerbread house hump is inspired.

Meagan finally convinces the judges she should stay, even if the facial sculpt is a little rough, with lollipop and cellophane look wiping away the memory of the gaffer tape she used in episode two.

Wayne's rock candy troll is nicely executed, but there's nothing that screams 'candy'. Plus he forgot to do hands. People have been sent home for less

Autumn's dismal green Gummi Bear is a technical and aesthetic disaster. This may be the first time Hetrick hasn't been mean enough.

Jenna's evil tooth fairy looks hydrocephalic, and her inability to control the air brush sabotaged any subtlety on the paint job. It's not a competence question: Her hand problems aren't getting better, and the numbness she works through is exacerbated by the guilt she's feeling since Katie (the other half of #teamredhead) went home last week.

Alex's candy princess is far too subtle, and what she has looks like sores. That would be bad enough, but the applications are just falling off. Her decision to go with a material she doesn't know backfires badly. 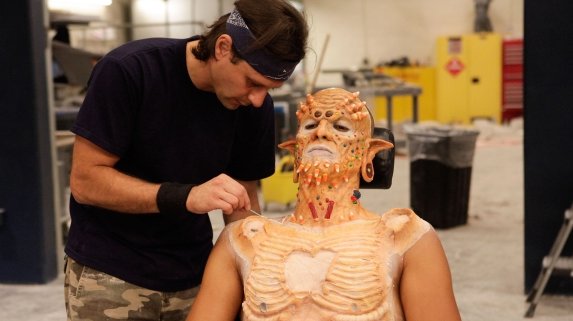 It's, er, whatsisface! Kris, who the camera ignored for the first few episodes (Image courtesy of SyFy)

And the winner of the spotlight challenge is … not Anthony, for the first time this season. No, it's mister middle-of-the-pack, Kris. "I stopped Anthony's winning streak," he gloats (well, technically, Kris, that was Eric Z., but we'll let that slide).

And Alex takes the sour bullet because she did just too little. There's no two ways around it, it's weak, but it really could have been any of the bottom three.

And now at least we're finished and what the frell is this? Face Off Redemption. Crap crap crap, an online spin-off? The idea is simple: Give the losers from this season a second chance. Give Hetrick a design that he likes, and you get a shot at a place on season five. Hey, the second shot deal worked last season, when they brought back Nicole and she won the whole deal. This first time around, the four rejects get two hours to create an alien ambassador out of off-the-peg prosthetics. Happy as we are to see Alex, Katie and Troy back, let's cut to the chase: Austin's own Ol' #DiscoWolverine, Michael Faust himself gets a shot at returning. Does he win the challenge? Watch the damn show yourself. Trust me, it's worth it if just for a kinder, more nurturing Hetrick.