Face Off Recap: Not So Super Heroes

One of the CenTex delegation goes home in week two 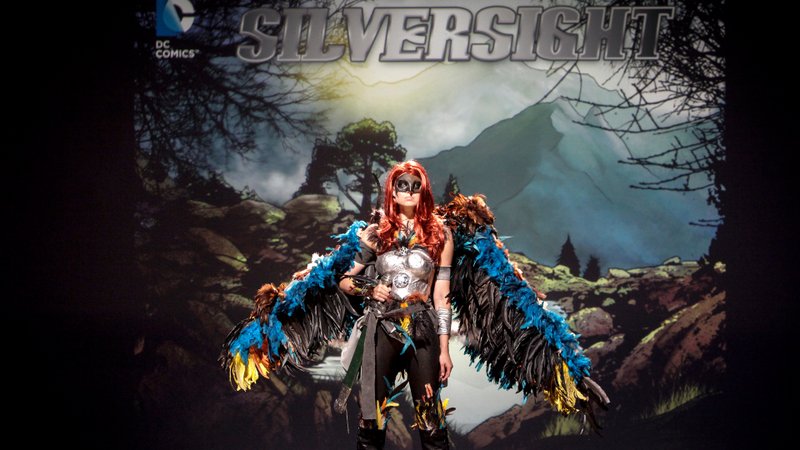 One of the most admirable aspects of Face Off is that, for all its amped-up drama, it treats the art, craft and techniques of the make-up and effects industry and oh, what's the bullhooey, Tyra mail?

If you don't know what Tyra mail is, it's annoying conceit from the endlessly manipulative America's Next Top Model. Tyra Banks sends one of her interns or staffers or Oompa-Loompas into the house to hide a letter and it contains that week's challenge, hidden in a riddle. Its real purpose is to get the cast screaming and squealing (dance, unrealistic body image size 0 puppets, dance!). That's never going to happen with a room full of artists and wait, what? Free tickets to Comic-Con International in San Diego? Let the squee commence.

Yes, this week's episode kicked off with the contestants taking a day trip to Comic-Con. Be warned, folks, it's about to get seriously Comic Book Confidential up in here.

At the con, they are met by DC co-publisher Dan Didio and artist Jim Lee of Justice League and All-Star Batman and Robin fame (Eric Z., one of the three CenTex contestants along with Jenna Green and Michael Faust, has a man-crush moment right about there). They explain that this week's challenge is to create a superhero: The prize is that the design will appear in an upcoming DC Title, since revealed to be issue 16 of Justice League Dark. What's the runner's up prize, their own Pacific Comics title (drops mic, walks off)? Excuse the Marvel fanbot moment here, but many DC characters suck (Aquaman. Just Aquaman. Now your argument is invalid), and JLD doubly so. But I digress.

Each of the contestants is teamed up with a DC artist to sketch their ideas. Actually, I'm not sure the comic people do the make up folks too many favors. A couple of the designs look a little … familiar, shall we say? Take Katie's ReVolt: Batman regular Tony Daniel produces a sketch that looks a lot like Kid Gladiator from Wolverine and the X-Men. Unfortunately, she abandons that in favor what Hetrick calls a "Juggalo tikki mask."

And not to throw stones, but the cybergirl that Daniel designs for House evokes Ladytron from the second run of WildC.A.T.S. Luckily the contestant throws that out in favor of the female Cenobite with a dye job and some cyber hardware. Seriously, did you think we wouldn't notice? It's a makeup effects show, guy. Nicely executed, but still, it's pretty derivative. Judge Glenn Hetrick liked it because it was unconventional and anime, and said that it spoke to him, but again, Glenn, that's not DC. Frankly, co-judge Neville Page nailed it by saying it was more horror than comic. 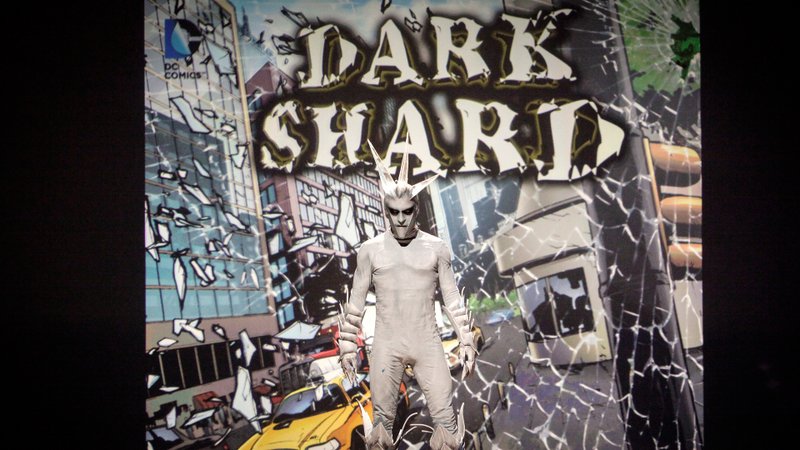 Alam's creation: Just don't look at the back (Image courtesy of SyFy)

At the top and bottom of the competition, it's the same story with opposite effects. Local boy Faust comes up with an anti-hero: Elijah, bringer of plagues, who has renounced his inheritance as the offspring of one of the four horsemen of the Apocalypse, but he could not get his plague mask/cowl combo to work. His final draft lacks subtlety, and so home he goes. Yet the same judges rave over Anthony's lava-themed hero The Infernal Core. Designed with Cliff Chiang (Wonder Woman), it is the winner, predictably and rightly, even though he had to dump half his costume because he couldn't get the mold open.

The dramatic irony is that, last week, Faust was ragging on Troy (oh, Troy, how we miss you already) for taking too long, and now he has time management issues, still working on his mask on day two. It's a similar problem for Anthony, who goes far too complex and heavy, so he has to trim back. By day three, he's still molding the back and chest pieces, and he's finally forced to give up on half his concept and go with a paint job. Could be worse. Alam's entire back piece keeps coming off, and she finally just cuts a huge hole in the suit. 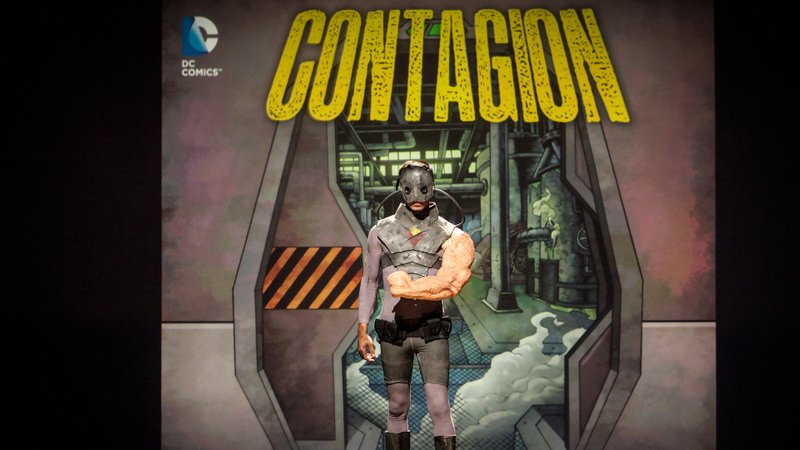 Yup, this is definitely the week where artist's eyes are bigger than their creative. When the judges see what Mike hath wrought, they hated his third thrash at the mask, whereas Ve Neill congratulates Anthony for turning "lemons to lemonade" when he worked around his chestplate fail.

Compare that to Meagan's Freedom fighter: A New York defender, loaded with Twin Towers symbolism. She had her own design problems ("I keep sculpting a cat robot," she forlornly mutters) but what she ends up with, as she admits, is "a disaster" The look on Neill's face when she says the forearm guards look like "TV Controls with gaffers tape around them" is priceless and painful. However, that's still not as bad as the entire perspex-covered back of Dark Shard falling off, and Alam doing a quick blue-paint-on-skin cover job.

That's a complaint I had occassionally with season two: That the judges would overlook massive fabrication issues for contestants they liked. Putting Meagan in the bottom three for visible gaffer tape and leaving Alam out when her whole costume failed to hold together seems unfair. Whether they liked Michael's design or not, at least it made it to the stage in one piece.

And the challenge seemed a little confused: Was this about creating a workable design for a costume, or a page-ready super hero? When Hetrick sees Alam's design, he says it looks like "Batman in anime," but the obvious frame or reference would be X-Man Iceman. Would it really have hurt the show, on this most specific of challenges, to have an actual comic creator as a guest judge? 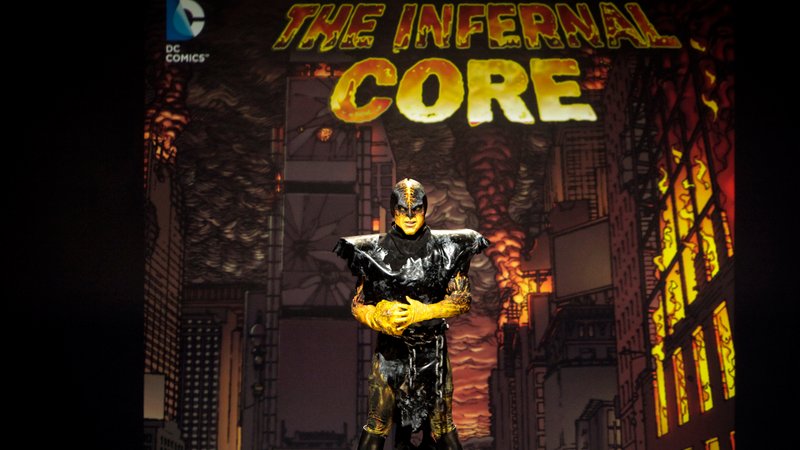 It's the same story with Eric F. The judges fall for his collaboration with Nicola Scott (Superman, Earth 2, produces the Dark Man-esque Dick Gritty, a heavily mutilated 1940s detective that no mainstream DC title would ever touch, but is kinda cool. Definite points for building his origin story into the design, but, and here's the big but, I don't see it in a DC title. Autumn's solar-inspired Mercury Ray (designed by Mark Buckingham of Fables fame), absolutely. Kris' open-skulled alien Orion X? A perfect adversary for Martian Manhunter, and also the only design that follows Jim Lee's advice of keeping to a primary color palette for the costume. I'd even say that Jenna's Silversight looks like a Hawkgirl redesign that could have headlined one of DC's New 52 reboots.

Was Michael's work a top look? Hell no. But at least his was A: complete and B: didn't fall apart. Designers have had fails before @ndash; Anthony crushed his fingers trying to seperate his mold @ndash; but he adapted. Alam broke out the spray can. And just for a devil's advocate C: Since this is Justice League Dark, the only designs that would really work would be Elijah and Dick Gritty. Yes, DC has a variety of styles, and that accounts for the variety of designs, but you would never pitch Martian Manhunter to for Sandman. So that JLD character design needs to be suitably grim and supernatural. Either that, or all we're heading for a one-panel Martial Law-style punch in the face for some goofball in tights and a cape. 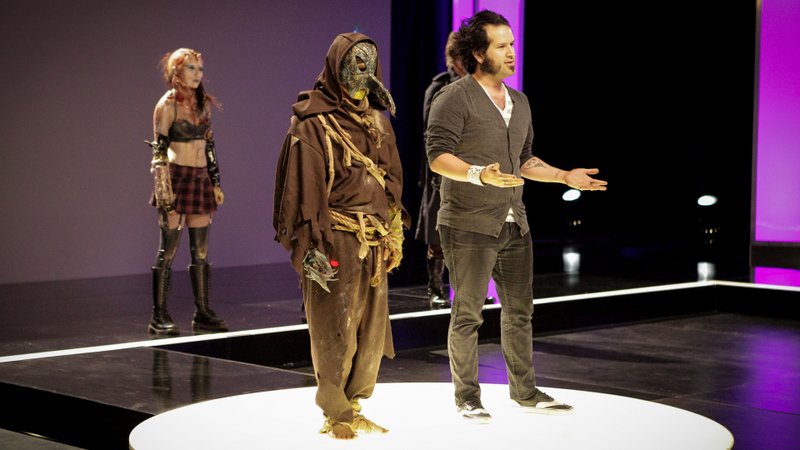 If we're going to be harsh on pure comic lines, Mike's creation was way more Top Cow than DC @ndash; after all, they specialized in shadowy supernatural anti-heroes like Witchblade and The Darkess. But he still created a costume in which his model could do a full back-flip. Kudos, especially since that's exactly what he said he would do before the season started: Create costumes that the actor could really work in. Now let's compare that to Alam. Did I mention that the entire back of her costume fell off?

And now the show has set itself a real problem. With Anthony winning the first three challenges (one foundation, two spotlight) he's looking like Connor, season one's presumptive and eventual winner. If it's not him, early surveys say it'll either be House or Eric Z. Now, this is a show built (as all reality competitions are) on drama and upsets. Take Matt Valentine getting kicked out of season two before the finale, or the unexpected return of Nicole in season 3. That's drama, people. So will Anthony's ambition finally drag him over the edge of the skills cliff?