I’ve been a little pokey about getting this recap up, but then last night’s episode lacked urgency, too – especially when compared to, say, the third episode of season 1, in which Mr. Pamuk’s heart went kaput in the bed of Lady Mary. Still, some interesting lady problems peppered this episode, from the political to the personal.

For having been catastrophically jilted only a month prior, Lady Edith’s looking rather spry. She’s cooled it on the Debbie Downer thing – I only counted one “woe is me” spinster aside the entire episode – and is instead diverting her interest to the political, writing (on Matthew’s recommendation) a letter to the editor of a London newspaper arguing for expanded voting rights for women. Based on next week’s teaser trailer, it looks like Lady Edith is making the move into journalism. (Good thing she comes from money.)

On Lady Mary's niggling suggestion, Matthew takes a look at the books, and he doesn’t at all like what he sees. Lord Grantham, it appears, has been chronically mismanaging the estate. That may sound somewhat drear, in terms of plot developments, but I’ve found the slow erosion of Robert’s authority, or even his reason for being, to be rather moving. He wasn’t needed during the war, and post-war, modernizing mores have left him hopelessly out of fashion. His lack of business savvy almost ruined his family, until son-in-law Matthew bailed him out – a son-in-law who not so long ago was viewed as inferior to the Downton Crawleys in every way and who will very soon have to broach the subject of the Earl of Grantham’s managerial incompetence. Oh, Robert. So proud. So dinosaurlike. (And yet so fuzzy-bear-ish, too.)

There was one element of danger in last night’s episode, although we missed all the cloak-and-dagger action and just got to see the teary aftermath. (So. Many. Tears.) In addition to fleeing Ireland in the dead of night due to his involvement in radical activity, Branson sprang a leak as the blubberingest revolutionary you ever did see. Even if Sybil did sign off on his plan to run away while she dealt with the authorities, there just wasn’t a lot of honor to Branson’s behavior. And if there were any questions over if his slowly thawing relations with the fam would be back on ice, Lord Grantham slammed the door on any détente with his masterful barking for Branson to go to bed. And that, my friends, is how to wither a grown man.

Did The Mentalist move to Downton? That was my first reaction when new footman James-né-Jimmy (played by Ed Speelers) showed up for service, and the downstairs ladies seem to agree that the new hire is very nice to look at, indeed. 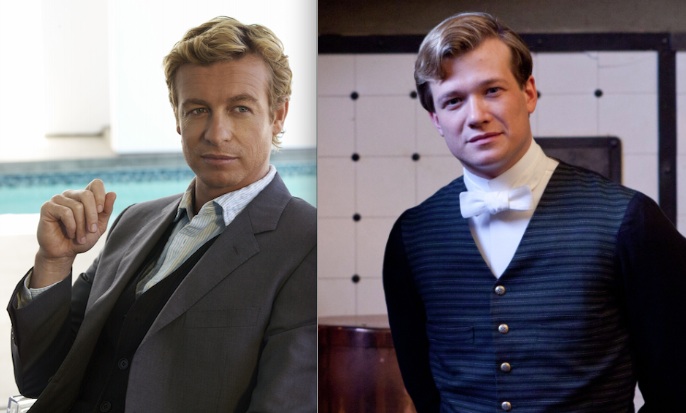 Even Mary worries about how first footman Alfred will feel in his shadow of James’ blinding blondness, noting that Alfred “looks like a puppy who’s been rescued from a puddle.” Daisy would like nothing so more than to do that rescuing herself; she even goes so far as to seek counsel from her father-in-law on how best to make her interest known. My biggest beef with Downton season 3 is in how quickly Julian Fellowes introduces conflict and then wraps it up too swiftly, but I like how much time he’s taken dramatizing Daisy’s halting steps toward standing on her own: both as a chef worth respect in Mrs. Patmore’s kitchen and as a woman ready for some romancing. That makes the episode’s resolution sting all the more: When Daisy gets the promotion she’s fought for, her attractive replacement as kitchen maid turns Alfred’s head, and he’s deaf to the fact Daisy was on the precipice of putting her heart out there.

OH MY GOD DOESN’T ANYONE ENUNCIATE IN PRISON?? Truthfully, I only caught half of what anybody said in the jailhouse scenes, but from what I gather, some guard be mad at Bates and was all wah-wah to the governor, who stopped delivering any correspondence between Bates and Anna, but didn’t bother to explain that to them, thus throwing husband and wife into dueling depressions, but then some other prisoner slash plot device whispered in Bates’ ear a lot and orchestrated another drug search where this time Bates stashed the drugs on his cellmate, thus pleasing another guard (but which one??) and putting him back in the good graces of prison postal services. I’m not a big fan of the Bates and Anna storyline, but the sentimental highlight of the episode had to have been Bates’ supernova-smile when he discovers he’d been branded a “dangerous prisoner.” “What a relief,” he beams, realizing Anna didn’t abandon him, her letters were just being blocked. 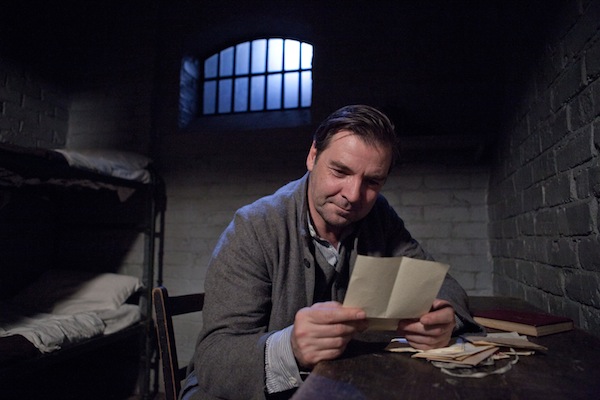 Ethel the fallen housemaid’s nonstarter plot resolves pretty much exactly how you figured it would the first time she popped up at Cousin Isobel’s support group for prostitutes: with her giving up son Charlie to the rich, jerky father of her rich, jerky (and dead) baby daddy. The story pits Isobel and Mrs. Hughes on two sides of the argument, with do-good dreamer Isobel arguing that a mother’s love trumps (says the wealthy woman who never had to deny her son anything) and Mrs. Hughes arguing that Ethel made the sensible decision for Charlie’s future (says the woman who’s never known what it’s like to love a son, let alone give him up). As much I’ve liked Mrs. Hughes’ increased screentime this season, this Ethel business has never been more than dutiful and dramatically inert… 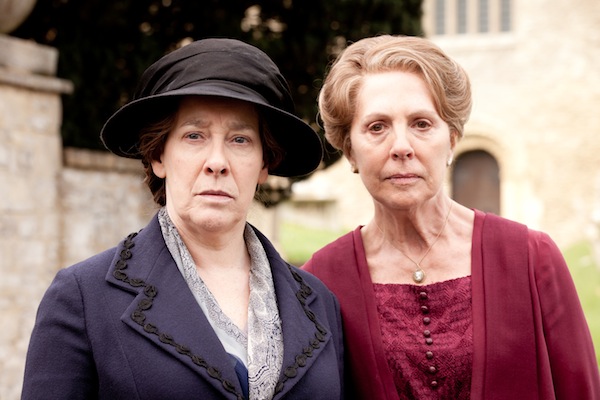 But I wonder if a different actress might have changed that? Amy Nuttall’s Ethel has never been particularly appealing – not when she was a charmless, sullen housemaid, or a reckless girl duped by her high-society seducer, or a proud woman certain that her baby daddy’s parents will act honorably, or a single mother who’ll do anything, from selling herself to giving him away, to provide for her son. Sounds like pretty ripping stuff, right? But Nuttall has only expression – sour-milk-face expression – to work with, and we’re already a year past this storyline’s expiration date.

Or maybe it’s the fault of Fellowes, who’s crafted an operatic arc for Ethel, but never found a way to make her sound remotely sympathetic. He’s toeing the same line with Branson. Sexy Irish radical starts as the chauffeur and (respectfully) seduces his boss’ baby girl. That shizz should be non-stop sizzle. But he keeps saddling Branson with knee-jerk jerkisms – Case in point: “We all live in a harsh world, but at least I know I do” – uttered at all the wrong times. Precisely how wrong? Well, when you abandon your pregnant wife in a foreign country, show up at her family’s estate in the dead of night, throw yourself at the mercy of her father, who then pulls some serious strings to avoid jail time for you, you might want to bench the self-righteous speeches a couple quarters. Also, if you regularly sup at a dinner table that comes stocked with bouillon spoons, then kiddo, you’ve left “harsh” long behind.