Episode 2 asks where's Waldo Truth, and who is Drew Thompson?

The marshals staking out the Waldo Truth clan

The "Where's Waldo" episode demonstrates how Justified's writers excel at the art of foreshadowing:

* We realize Raylan's (Timothy Olyphant) dalliance with bar owner Lindsey will ultimately provoke a confrontation with her husband, ruthless bare-knuckle boxer Randall (Robert Baker) when Raylan tells him to leave the bar and Randall responds "Do you think you could make me?" Our boy Raylan has never been one to let a challenge like that go for long.

* We're informed that Art (Nick Searcy) is nearing retirement but he deflects his aspiring replacement from Bowling Green with descriptions of his Harlan County staff, saying "You know why you got arrests with no incidences, cause all your fugitives are pussies! Hell, I got marshals in this office that are more trouble than your fugitives." He goes on to elaborate their assorted failings, quirks that could make for fascinating potential character enrichment down the line.

* Poor, stupid hooker Ellen May (Abbie Miller) is the likely sacrificial chew toy in the coming tug of war between two forces of evil.

* Boyd Crowder (Walton Goggins) is distracted and off his game. He refuses to face that the Rev. Billy's church could be a threat to his criminal enterprise until johns run bare-assed from the brothel during a visit from cherub-faced hillbilly children singing hymns – surely one of the best laughs of this, or any, season. The look on Goggins' face is absolutely priceless.

* Boyd and Rev. Billy (Joseph Mazello) throw down in a glorious toe-to-toe, con man to con man, scripture quoting preach-off and Rev. Billy appears to emerge with the upper hand, although Goggins rivals the late Burt Lancaster's turn in Elmer Gantry when it comes to actors quoting scripture. Amen! However, the always vigilant Boyd notices that Billy's stone-faced sister, Cassie (Lindsay Pulsipher), could be his entree into the church operation and we just know he'll find a way to exploit that opening.

* The other major threat to Boyd's business is Wynn Duffy (played by the supremely smarmy Jere Burns), who has emerged as the new regional head of the Dixie Mafia in the absence (and supposed death) of season three's truly frightening Robert Quarles (Neal McDonough). Now that he's not quaking in his leather loafers as a bit player in Quarles' horror show, Duffy has ruthlessly come into his own. He demonstrates this by casually exterminating one of his own heroin sales force rather than enter into a proposed partnership with Boyd. Once again, Boyd's stunned reaction is palpable, and Goggins steals the show. When Duffy asks Boyd about why Arlo Givens killed a Dixie Mafia soldier in the slammer, we see the various threads of this story begin to coalesce.

Quote of the week: It's a tough choice, but I'll have to go with Art's reason for riding along on the Truth family stake-out: "For thirty years, this office has dropped the ball on a federal fugitive that's been living on a draw check and I'd like to put that right. Also, that mystery bag thing's giving me a little bit of a marshal stiffy."

Executive producer Elmore Leonard's just got to be proud of this dialogue. 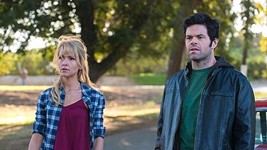 'Justified' Recap: 'This Bird has Flown'
Ladies have flown the coop and Raylan owns birds worth a goodly sum