Face Off Recap: King of the World

Season four begins, and the sideburns are awesome 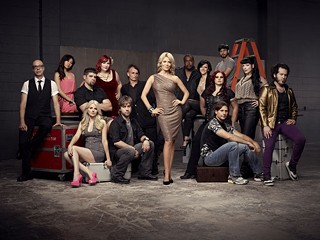 And then there were 14: The opening cast of 'Face Off' season four. Guess which one they're calling Disco Wolverine.

So by now you know (because you read our earlier coverage, right?) we have three Austinites on set for season four of SyFy's special effects makeup show: Michael Faust (aka #DiscoWolverine), Eric Zapata (Eric Z., not to be confused with fellow competitor Eric Fox, aka Eric F.), and Jenna Green. Around them are another 11 contestants, of varying skill levels. One interesting change this season: The producers are more open that that there are some ringers in here, with more contestants admitting they have some to a lot of indie film experience.

Now Faust's storyline for this season is all about … revenge! Yeah, his brother Matt valentine was robbed, robbed I tells ya, in season two, so it's time for a little sibling vengeance/one-upmanship. The show's done this before with Derek and Eric in season three, but neither of them had sideburns that could toe-to-toe with the grumpiest judge with latex skills, the one and only Glenn Hetrick. Yeah, the Glennster is back, as is Oscar winner Ve Neil, and creature designer Neville Page. What, wait, no Patrick Tatopoulis? Boo. I shall miss his immovable forehead, but he's off shooting the sequel to 300

The promise for this year is bigger challenges, so episode one better bring it. It's a two-part problem. The first half is the the foundation challenge, where the contestants design a fantastical queen, using a crown as inspiration. The second half is the spotlight challenge: This time, they must design a goblin king for their queen, pulling design elements from St. John's Episcopal Cathedral in Los Angeles. Which host McKenzie Westmore says is Gothic, but it's clearly Romanesque Revival. Whatever. Back to the make-up.

Now we already know that there's going to be some serious bloodletting this year. With 14 contestants, and only nine episodes, we're looking at multiple eliminations. That makes the foundation challenge important, because that's the traditional elimination vaccination. This time, it's also the first chance to see the artists at work. The crowns mean this is an art and glamour challenge, and it's no surprise that Antony's gorgeous blue cat lady (coughAvatarcough) wins him immunity. And kudos to Jenna and Eric F. for being in the top three.

Oh, yeah, Eric F. He may be technically good, but sweet Moses he's an annoying "Goth club kid" cliche (and having a haircut that makes him look like Gary Oldman in The Fifth Element is doing him no favors.) But then again, season two made Jerry look like the worst human being alive, and apparently he's a lovely guy, so take that for what it's worth.

For the spotlight challenge, everyone is paired up. Eric F gets Jenna, meaning two of the top looks from the foundation challenge are working together. Eric Z. gets paired with Autumn (who is looking like this season's Jerry); And Michael Faust is paired with Troy.

Now, I'm liking Troy already. He gets the line of the night with "make-up is not gangsta," but after three seasons, I'm not getting too connected to any contestants. We viewers have become like Lee Marvin in The Big Red One. These rookies are going to come and go, and you gotta know who the survivors are before you even bother learning their names.

Back to the makeup. The lesson for the day is that everyone has too much to do, and has to depend on the one hour 'last looks' touch up to do a lot of the heavy lifting. And then it's in to the judging with Hetrick, Neil, and holy crap where did John Rhys-Davies come from? And how does he not get any older?

When the makeup is reviewed, Eric Z. and Autumn's woodland king is well finished, but the silhouette is a little lacking, and Alam and Kris do the bark a little better. Jenna and Eric F.'s desiccated desert lord is fascinatingly skeletal, and the dried bush as a crown is a lovely touch. Hetrick is already tearing into Troy and Michael's volcano king before he's out of his chair, which is never a good sign.

Little side note: House (not that House) is probably Faust's closest rival since he also comes from a Halloween haunt background. But when he and Katie go to the Arctic for inspiration, it was vital to not look like the Ice King from Adventure Time. Mission not achieved. But it was a really great Ice King.

So now to the nail biter. Hetrick has his glower on as he applauds everyone for the quality of the work (that man is the king of the bait-and-switch compliment/insult, or as we call it, the complisult. Insument? Nah, complisult). Neil goes after Troy and Michael hard for hiding the best part, the chest piece, but it's a bad sign when even Rhys-Davies is brutal. The guest stars are about patting everyone on the head, not pointing out that it looks like two different projects welded together.

Frankly, they're only even close to saved by Wayne and Alex forgetting to budget enough time to actually paint their alligator warrior. But the loser heading home is … damn you, no, not Troy. Ah, I liked him. Eh.

At the top end, Eric Z.'s bark arms are masterful, and Jenna's decision to make the chest piece super-dark and then lighten it was spot on. Still, no shock that Anthony and Megan win the challenge with their mountainous monstrosity. No shocker either that Anthony is the overall winner, because he's head and shoulders above everyone else.