DVD Watch: 'The Man Who Knew Too Much' 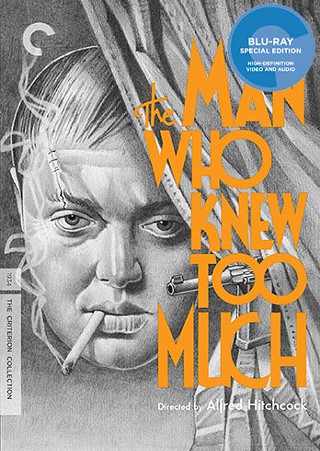 Alfred Hitchcock’s 1956 The Man Who Knew Too Much may be the more come-hither of his two takes on the same tale – it’s got color, American accents, and big stars in Jimmy Stewart and Doris Day. But ask Guillermo del Toro and he’ll tell you the American version is an empty, flashy billboard next to the original 1931 “Vermeer.”

Before he became an Oscar-nominated filmmaker (Pan’s Labyrinth), del Toro was a Hitchcock scholar; his careful reading of the film includes the observation that Hitchcock often revisited the theme of families transformed by violence or hardship, a “very Catholic trait.” That observation is part of an interview packaged on the Criterion Collection’s newly restored, single-disc release of the maiden The Man Who Knew Too Much (DVD, $29.95; Blu-ray $39.95).

Hitchcock was still a British citizen when he took his first swipe at the story of a couple whose child is kidnapped when they stumble into the middle of an assassination plot. Hitch preferred his American do-over – he shrugged off the original as “the work of a talented amateur” – but there’s a lot to recommend the original. Hitchcock’s apprenticeship in the German film industry shows through in the film’s lovely shadow and silhouette work, while the masterful Alfred Junge – soon to become an integral part of the Archers collective – did the art direction. The cast is weirdly both more flip and more moving. There’s a larkiness to the Lawrence family – Mom Jill (Edna Best) is a competitive shot, while the only preoccupation of dear Dad Bob (Leslie Banks) seems to be looking professionally bemused. Their brisk cheeriness bumps up against a near-comical stiff upper lip (only moments after a man has died in her arms, Bob instructs Jill to pull herself together), and both these tendencies complicate and enrich the real tenderness of the family dynamic.

And then there is German refugee Peter Lorre, in his first English-speaking role, playing the placid-featured gang leader with murder in his heart and a white-blond skunk stripe bisecting his head. Nothing in the American remake can match his silky malevolence. Surprise: Lorre learned his lines phonetically.

As with the American version, the standout set piece is the Royal Albert Hall assassination attempt, here choreographed to Arthur Benjamin’s thematically spot-on Storm Cloud Cantata (he wrote it especial for the film). Stoic Jill – knowing that a man is about to be killed, and that preventing that murder will endanger her child – begins crying. Her tears blur her vision, and the camera, taking her perspective, blurs, too. The shot dissolves into a close-up of the marksman’s gun creeping out from behind a curtain. It’s as elegant an abutting of visceral emotion and chilling menace as anything Hitchcock ever did. Some amateur.