Another wedding, and the war between Thomas and O'Brien ramps up

In terms of viewer engagement, Downton Abbey creator Julian Fellowes hasn’t done Edith any favors. A pity-partying sourpuss on her best of days, a backstabbing conniver on her worst, she’s always been the least interesting of the Crawley clan. Oh, but how the heart ached for her last night. 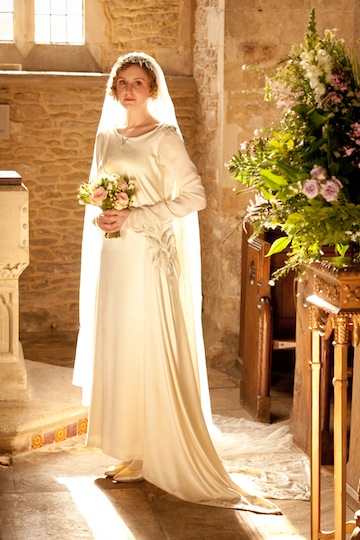 UPSTAIRS:
The episode opened with preparations for the second wedding in two episodes. Edith surveys the hubbub with something like wonder, as if she can’t believe all this work is for her, the unremarkable, neglected middle child. (She doesn’t help matters by forever pointing out how sorry her lot is.) Still, starting with her second season arc working in Downton’s makeshift rehabilitation center, she started to mellow, become more gracious, and one genuinely hoped for the best with this quickie marriage to neighbor Sir Anthony. No, he’s no spring chicken (he’s 25 years older than her), and yes, he’s got a broken wing (it’s just a lame arm, people – it’s not like anybody was going to put Matthew out to pasture when he couldn’t walk). But he appears to love Edith, so why not wish these crazy kids well?

Everyone (save Granny) resolves to do just that, but no matter: All those loaded looks and Robert’s man-to-man chats with Sir Anthony have already done their damage. Violet, ever unflinching, calls it: “He looks as if he’s waiting for a beating from the headmaster,” she says of Sir Anthony at the altar, just moments before the arrival of Edith (looking lovely, although my pal James claimed the cape made her look like SuperBride). Anthony squirms through about half a second of the ceremony before blurting out he can’t go forward, can’t rob Edith of her youth. He genuinely appears to love her, and one surmises this is some sort of very British idea of honor and duty and sword-falling at work here, but sheesh – how honorable is jilting a girl at the altar? Naturally, the brushoff turns Edith into a snotting mess, but when she wakes up in the morning, it’s with a walk-to-the-gallows acceptance that her lot is to be “a useful spinster.” Again: How the heart aches for poor Edith.

DOWNSTAIRS:
Thomas and O’Brien continue to peck at each other, this time with Thomas orchestrating a rumor that O’Brien is leaving the house, which leads to some awkwardness with her employers. In truth, it was kind of a dud as far as dirty schemes go, but worth it just for O’Brien’s look of pure of malice when she vows revenge on Thomas. THE POKEY:
Bates has apparently made some enemies at the jailhouse. A fellow prisoner tips him off that drugs have been planted in his cell, which Bates manages to find and conceal only just before a guard comes in for a search. The guard knows exactly where to look, and is powerfully pissed when he doesn’t find what he came looking for, which makes one wonder: Who’s got it out for Bates? Sure, he roughed up his cellmate last episode, but nothing about him suggests he has sway with prison management.

Meanwhile Anna – otherwise known as the lady maid with the laxest work schedule in the history of servitude – continues her quest to prove Bates’ innocence. An interview with the best friend of Bates’ dead wife produces a clue that Anna appears to gloss over – that on the same day as her death, Vera Bates scrubbed her nails ferociously after baking a pie in anticipation of her estranged husband coming by. Granted, Anna doesn’t have the benefit of endless Law & Order repeats to draw on, but I’m thinking perchance evil Vera was plotting a poisonous end for Bates?

UPSTAIRS:
Matthew receives a letter from (now-dead) Mr. Swire informing Matthew that he knew all about Lavinia and his breakup, and that he still wants Matthew to inherit his money anyway. Mary has to resist the urge to break into a jig, thinking Matthew can finally put away his annoying principles and pour all that money into saving Downton. But Matthew’s not convinced the letter hasn’t been faked – when exactly could Lavinia have posted the letter, in between influenza deliriums – so Mary goes below decks to find confirmation the letter left the house (it was Daisy who did the posting). It’s all a lot of not terribly interesting tail-chasing toward a foregone conclusion – that Matthew will save Downton – but it does come with a little wrinkle: Robert will only accept the money if Matthew agrees to become “joint master” of the estate. Matthew says yes; bro slaps all around; power struggle commences next week? 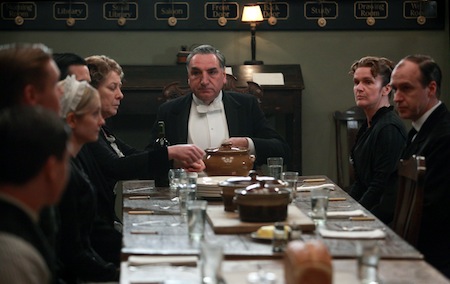 DOWNSTAIRS:
Carson overhears enough of a conversation between Mrs. Patmore and Mrs. Hughes to determine Mrs. Hughes is unwell, and he spends the rest of the episode sticking his nose in, in the sweetest of ways – bullying Mrs. Patmore and Dr. Clarkson for information, approaching Lady Cora about lessening Mrs. Hughes’ load, which in turn led to a moving scene in which Lady Cora assures her housekeeper that whatever her diagnosis, she will have a home and caretakers at Downton. At episode’s tail-end, Mrs. Hughes goes into Dr. Clarkson’s office to get the biopsy results, and then we cut to Mrs. Patmore telling Carson that Mrs. Hughes is in the clear. While the sight of a sunny Carson singing a little ditty warmed Mrs. Hughes’ heart and mine, I’m not convinced. Mrs. Hughes makes a point of instructing Mrs. Patmore to stay in the waiting area, so she hears the diagnosis alone, and the show makes a point of leaving us out of the room as well. And if it’s not a feint? Then that’s yet another big drama introduced last episode and resolved this episode with a minimum of fuss.

THE PEANUT GALLERY:
Is it realistic – to the era or the Crawleys as we’ve come to know them – that everyone is so against Edith marrying Sir Anthony? That age gap, while certainly notable, wasn’t nearly so scandalous a century ago. He has a title, he has money – old money, too, the kind that buckles Granny’s knees – and he has obvious and tender feelings for Edith, who’s nearing spinster age herself. So why’s everybody convinced he’s such bad news? This one whiffs of overly manufactured plot wrench – possibly because Fellowes looked around the room and realized he’d already married off two daughters; marry off the third and where’s the upstairs romantic intrigue going to come from? Still, the good news is: Edith, so underloved as a family member and a character, probably has some very interesting storylines coming her way.

My patience is wearing thin with disgraced housemaid Ethel repeatedly popping into Isobel’s recovery house for ladies of the night to blurt “I-have-to-tell-you-something-no-wait-I’m-not-ready!”

Tom’s looking rather at home in a tuxedo, isn’t he? Vive la revolution, and pass the escargot, please.

When Isobel suggested they’ll have to find Ethel “something to do,” the supremely classy viewing contingent at my house modified that to “someone to do.” Sauciness ahead? One hopes, but still, best not to raise expectations too much. Let’s let have Violet have the last word: “At my age one must ration one’s excitement.”