A documentary examining the past, present, and future of soul food 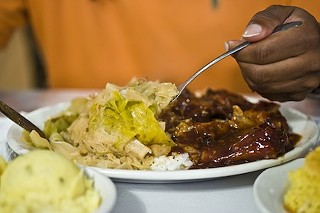 I grew up eating my grandmother's country-style cooking. Similar to traditional, African-American soul food, our meals of fried chicken with heaps of mashed potatoes and corn and greens and biscuits are an integral part of my personal history.

Yet, my interest in the anthropological issues surrounding food have enlightened me to the true origins and ramifications of this type of cuisine. These are precisely the topics of Byron Hurt's great new documentary, Soul Food Junkies, that premieres for the Independent Lens series on Monday, Jan. 14 at 9pm on PBS.

Hurt narrates the film as a friend, and as a fellow lover of the camaraderie sponsored by family meals and gatherings centered around home-cooking. The premature death of his father inspired him to dig deeper into the roots of the matter of how food affects black culture and how black culture affects food. Why does a huge percentage of Southern culture – and, through the transference of culinary traditions, our whole nation – continue to celebrate the types of food and eating habits that are contributing to widespread disease? The factual correlations are there. Why aren't we accepting new terms of edible engagement and learning to indulge in moderation (if we must at all)?

Hurt explores the beginning of soul food culture and traces it back to the days of African slave trading. An economic matter, the slave owners introduced large amounts of carbohydrates, such as corn and rice, as sustenance for the horrors of the journey overseas. Once Africans were forced onto American plantations, they were given scraps, the worst cuts of meat, and the spoils of the field. And so began the tradition of such staple soul food items as cornbread and dishes such as chitlins. In essence, the food initially intended as a means of survival is now often considered a delicacy, the crème de la crème of old-fashioned good eats. Also interesting is the idea that the black women charged with cooking all of the meals and raising all of the children – black and white – are responsible for the flavors now synonymous with the Southern way of life that for so long rejected their equality.

Hurt documents the eating habits of his own family and films many people immersed in soul food, specifically related to black culture. Interviews with tailgaters and food justice advocates shed light on the root of some of the stigmas: a rejection of the deep-fried, buttered, salted, and soaked soul food of one's culture is perceived as a rejection of the culture itself. Stereotypes surrounding the support of organics, vegetarianism, and small portions are indicative of the cultural battle that looms if necessary changes are to be made. It is, as one interviewee describes it in the film, “class-based apartheid - for food.” The ideas that healthy eating is emasculating American men, that chemical-free meat is elite, that kids will only eat neon-colored advertised snacks are not only wrong, they are dangerous. Soul Food Junkies tackles a slew of tangents from the Black Panthers' contributions to healthy food communities to impotency relieved by a vegan lifestyle.

The footage and interviews detailing the civil rights movement included in Soul Food Junkies are poignant and powerful – I choked up during more than one scene. As mentioned in the film, tradition is often born of necessity and it was during the black power movement of the 1960s that the term "soul food" was coined. Nourishing the bodies and souls of those fighting the system became a means of survival once again. Hurt highlights the peaceful revolt of Ms. Peaches by way of serving sandwiches from her restaurant to protestors in Jackson, Miss.

For many, food is emotional. Soul Food Junkies discovers that it's not just about the love and comfort of familiar food at all: It's also about justice, and the emotion of change. Or at least, it should be. Food justice affects every member of a community – those with proper access to fresh food and those without. Hurt describes the multicultural, multigenerational revolution taking place in communities across the nation. To fight the corporate structures that have industrialized our food systems is a modern version of our civil rights movement. Every person deserves a chance to live a healthy life, but it requires education across the lines of color and class, and a revolution.

Byron Hurt's documentary brilliantly explains the ways in which culture and food bind us together. It is not about rejecting one's heritage or culture, but rather, finding healthier ways to embrace it. Hurt, and many of the people featured, also believe that moderation is the key: eat fried chicken once a month, not once a day. Bake, instead of fry. Choose fresh vegetables and use the power of community to demand access to them. In fact, in celebration of the PBS premiere on Monday, the Independent Lens series has a contest to win Soul Food Junkies inspired cookbooks.

I want to share this film with everyone I know and then visit my grandmother, Honey, and show it to her. We'll discuss it over a home-cooked meal.