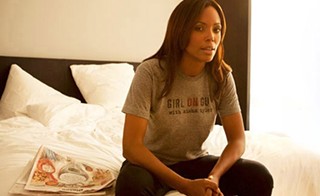 But hey, SXSW Interactive is all about innovation, and it’s not like Tyler doesn’t have the bonafides: Girl on Guy was named the best new comedy podcast by iTunes in 2011, which she also produces and engineers. The 16th annual SXSW Interactive Awards ceremony takes place Tuesday, March 12; Tyler also has a new book, Self-Inflicted Wounds: How I Learned to Embrace the Epic Fail out this summer on HarperCollins imprint It Books.

Yesterday the Internet saw the debut of the first trailer for Hemlock Grove, the new miniseries from Michener Center for Writers alums (and Film Flam pallies) Brian McGreevy and Lee Shipman. The Netflix-original series, which debuts in April, is based on McGreevy’s 2011 novel Hemlock Grove; the Chronicle spoke with McGreevy about the book and miniseries back in April of 2012.

Next week the Hill Country Film Society teams up with the OM Foundation to present Eat. Drink. Be Inspired, a food/wine/art/film extravaganza in Fredericksburg. The two-night fundraising event runs Jan. 17-18 and will include a screening of Beyond Limits, an inspirational doc about Bonner Paddock, a man with cerebral palsy who takes on Mount Kilimanjaro; Paddock is the founder of the OM Foundation and will be in attendance at the event. Other happenings include a silent auction and foodstuffs from Hill Country restaurants, with pairings by Becker Vineyards. Tickets can be had here.

ATX Television Festival and the Alamo Drafthouse’s Girlie Night want to get Girl-y with you. Specifically, with a Jan. 15 sneak of the first two episodes from Girls’ season 2. Actually, the first episode will have already premiered by then – mark your calendars, kids: Jan. 13 – so it’s really more just a sneak of episode 2 and a second taste of episode 1. Whatever, you were just going to illegally download them anyway, weren’t you? This is better: Free food and Tito’s vodka drinks, no guilty conscience afterwards. RSVP required (and doesn’t guarantee admission).

Christeene and PJ Raval will showcase their many video collaborations as well as premiere latest video “Big Shot” on Thursday, Jan. 24, 8:30pm, at Cheer Up Charlie’s. Surprisingly safe-for-work teaser trailer below.

And if the multitalented Christeene isn’t busy that day, I heartily encourage her to get down to the Long Center for the Performing Arts (701 W. Riverside Dr.) tomorrow, Friday, Jan. 18, cuz that’s when open auditions for dance competition show/my secret obsession So You Think You Can Dance are being held. I only think I can dance when nobody’s watching and I dust off the White Nights soundtrack, but if you think you’ve got the goods to be on Season 10, then read the audition info here.

Ben Powell’s short doc “Phil Collins and the Wild Frontier” made its Kickstarter goal of $10,000 with days to spare, so the filmmaker has decided to set the bar even higher: $30,000 will secure him the rights to a new track by Phil Collins, whose book tour promoting The Alamo and Beyond: A Collector's Journey is documented in the film.

Another Kickstarter project, Alex and Ash, crossed our path recently and fairly charmed the pants off of us with its Woody Allen-meets-adorable-millennials campaign video. It’s a new romantic comedy from longtime Austin filmmaker Steve Mims, who wrote the script with actors Alex Dobrenko and Ashley Spillers in mind. We’ll let them make the pitch.