Financial ruin and a wedding in peril kick off season 3

Downton Abbey returned last night with a wedding, dirty dealings, and the threat of financial ruin – although, on the subject of the latter, I’m not sure how worried we need to be that the Crawleys will lose the estate that gives the show its name. Unless creator Julian Fellowes likes the ring of A Modest But Fashionable Townhouse in Mayfair?

UPSTAIRS:
Season three’s two-hour-long first episode somewhat inelegantly introduces new conflict with back-to-back revelations: Lord Grantham’s bad investment has bankrupted Cora’s fortune, and heir/future son-in-law Matthew is in line to inherit a good chunk of change from Mr. Swire, Matthew’s first future father-in-law. And on the subject of poor dead Lavinia: No, Matthew is not a medical doctor, but he’s no dope either, and his insistence that Lavinia died from a broken heart and not an influenza pandemic that wiped out 2% of the world’s population is a touch theatrical. Still, he’s met foot stamp for foot stamp in the melodrama department by Mary’s eve-of-wedding freakout when Matthew announces if he gets the money, he can’t keep it – even if it means losing Downton Abbey. Michelle Dockery’s delivery is withering – “How can you be so disappointing?” – but still: Mary’s brattish eruption over the mere possibility of an inheritance feels cooked up just to juice their wedding with more will-they-or-won’t-they suspense. Ah, but it also laid the groundwork for a reconciliation scene that was as romantic as anything the show has attempted before – a don’t-look-or-it’s-bad-luck kiss the night before the wedding. Mary peeked anyway, and boy, you should have heard the wailing at my house that the stolen look boded badly for their future. 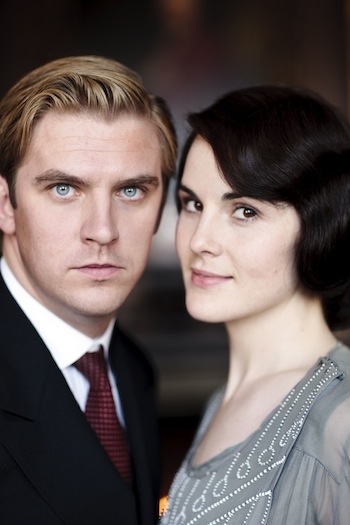 DOWNSTAIRS:
“That treacle tart just hit the spot,” announces butler Carson at episode’s beginning –  a retort to critics who accused season 2 of being too soapy? – but that’s the last moment of calm below decks: Kitchen maid Daisy goes on strike when her promotion to cook’s assistant doesn’t go through; housekeeper Mrs. Hughes finds a lump in her breast that may be cancerous; the oven goes out hours before a dinner party; and snaky Tom takes offense when O’Brien maneuvers her nephew Alfred (newcomer Matt Milne) into a valet position. Thomas’ Snidely Whiplash thing has frankly grown tiresome, but this new wrinkle – of former allies Tom and O’Brien going to war with each other – is deliciously, bitchily promising. 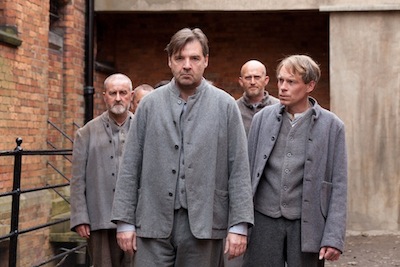 THE PEANUT GALLERY:
For having teased Matthew and Mary’s tortured love affair out for so long, Fellowes sure was chintzy with the actual nuptials, cutting from pre-vows altar to the car returning from honeymoon. (Hey, Anna’s not the only one who was looking forward to seeing the South of France!) Still, it was in keeping with one of the consistent aims of this episode, which was to put into perspective Downton Abbey’s role in the community. The estate is both the county’s major employer and in some ways – as dramatized by the village done up in streamers and townsfolk cheering on Mary’s churchbound car – its beating heart.

UPSTAIRS:
The two younger Crawley daughters got less screentime, but their stories advance nonetheless. Lady Sybil returns from Ireland with husband Tom and a baby on the way but only mentioned in brief by, natch, her gauche American grandmother Martha (Shirley MacLaine). Political firebrand Tom – ever the chauffeur in Lord Robert’s eyes – bristles at being back at Downton, with Sybil ever making apologies for him. “Here he feels so patronized,” she confides to Mary, which is ironic, considering Tom can’t say goodnight without turning it into a lecture. That said: Tom got 100% sexier when he stopped slicking his bangs back, so what’s one more scold about upper-class excess?

And Lady Edith’s romantic dalliance with neighbor Sir Anthony Strallan continues apace, despite her father’s objection to their quarter-century age gap and Sir Anthony’s lame arm. Edith and Anthony are rather adorably English, and perfectly suited: With their matched milky-wan complexion and lead-with-the-nose way of addressing the air, they’re like bobbing dolphins, all weird, benign smiles. 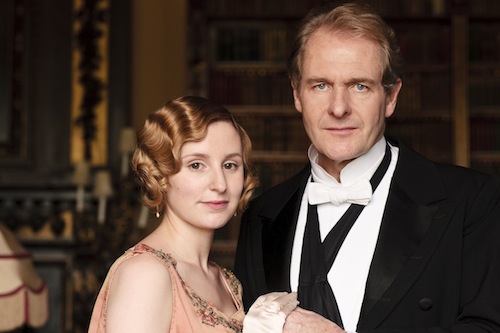 THE PEANUT GALLERY:
As ever, Dame Maggie Smith was a dry delight. On the subject of Martha: “She is like a homing pigeon. She finds our underbelly every time.”

After so much breathless buildup to Shirley MacLaine’s guest star, maybe it was inevitable for the part to go a little pfffft. There was a lot of swanning, but not quite the stinging barb parade one had hoped for. Still, that episode-ending eye roll of hers was divine (when Robert didn’t know to clink glasses after a toast), and I suspect a “Whisky, No Water” screenprint shirt or decorative mug is already available at an Etsy shop near you.

Next week’s episode promises another wedding – Edith’s this time. There should be a wedding in every episode! Who else can we marry off?