The Lights Go Down at South Lamar It may not be the original Alamo Drafthouse, or the biggest, but the Alamo South Lamar was the heart of the empire. As Drafthouse supremo Tim League recalled last night, "There's so many memories in this facility. Some I can talk about, some that I can't, some that are legal, and some that have nudged past the grey area of legality."

It's the second big closure in the history of the Drafthouse, and it's a lot less permanent than when the original site on Colorado shuttered in 2007. And now, with one final hurrah, it shutters for nine months as Lamar Square changes forever. This is a temporary closure, just long enough for the planned redevelopment of the entire plaza. And yet, even though the Drafthouse shall return in September, just in time for Fantastic Fest 2013, it was a still a night tinged with a little sadness.

Walking up to the theater, the whole parking lot was in darkness. All the other businesses have gone. Peaking through the windows at the Highball, the bar has been gutted and only the old octagonal mirrors remain on the wall. As for the building next to the Drafthouse, guitar-dealing impresario Ray Hennig's old home for so many years, that's nothing but a pile of rubble now, opening up the lines into the neighborhood behind. Well, at least for now: That's where the Drafthouse will expand, adding two new micro-screens and relocating the Highball.

But the night was, as it always should be, about film. League said, "We just wanted to come together and mingle and hang out and watch movies with friends one last time before closing this sucker down for what's going to feel like a very long time to me."

When Colorado closed, the Leagues gave their old pal Quentin Tarantino a three night run, then topped it off with a block-rocking screening of Earthquake. This time, it was an equally loaded card: Benefit screenings of Hausu and Rumble in the Bronx, a special Girlie Night, a Three Stooges marathon and more. But for the horror and genre fans, the big draws were Phantasm creator Don Coscarelli returning with his newest genre-bender, John Dies at the End, and a double bill of home-fried horror as Tobe Hooper presented an archive print of The Texas Chain Saw Massacre, and its delayed sequel Texas Chainsaw 3D. Enter the beaming and humble Coscarelli, a man who described himself as coming from "a part of the country that is Drafthouse-deprived." Not that he's an Alamo virgin: Way before debuting a sneak clip of his new film at Fantastic Fest 2011, back before League himself threaded up a print of Bubba Ho-Tep at the Alamo Village for a special screening for writer Joe Lansdale, Coscarelli was one of the first film makers to experience the Drafthouse's madcap approach to special events. In 2000, the old Colorado site hosted Phantasmania, a two day celebration of all things Phantasm conceived in part by League. "We're looking at the ultimate showman," said Coscarelli, who recalled one stunt from the night. Since star Reggie Bannister, who played ice cream man/silver ball nemesis Reggie, was there for the 2000 love-in, he said, "Tim had Reggie going around serving ice cream to everyone in the audience."

For Coscarelli, that commitment to making special events special was why it was important for him to come to Austin again, and why he felt honored to be part of the last night at South Lamar. He said, "So many times, Tim and the Drafthouse have helped me with my career." 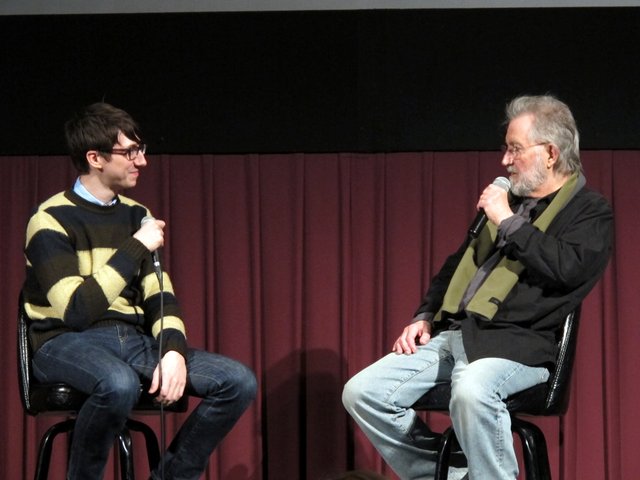 "It's good to be home." Tobe Hooper (Photo by Richard Whittaker)

Tobe Hooper was a legend decades before the Drafthouse's bricks were drying in the kiln, but even he was part of a sort of home coming. The original Chain Saw almost smells of salt cedar and the Hill Country. Yet, for such an iconic film, and one with such a pivotal role in the history of Texas moviemaking, it was surprising how many of the hardened horror hounds present had never seen it on the big screen before. And even if they'd heard stories about the miserable shooting conditions before, it was different to hear them from Hooper himself. Like dealing with the stench of rotting creature cadavers littered across the set: He said, "The pound showed up, with a truck load of animal corpses. (Makeup artist) Dorothy Pearl tried to inject them with formaldehyde. One was in her lap, and she shot into its leg, and the needle went through it and went into her leg. She said, 'This isn't working.'"

So they ended up with a house filled with stinking, rotting meat, a cast sweltering at the end of a 27 hour last day of shooting, and a pile of rapidly putrefying animal bodies. Hooper said, "Someone decided that they would make them disappear by pouring five gallons of gasoline on them and setting them on fire. Like Forbidden Planet they would just disappear or something." Not quite. Instead, he said, "This black smoke came rolling into the house, and between takes everyone would go puke."

This was just one more indignity on a set where it seemed like Hooper was the only person that didn't get injured. He said, "At the end of that shoot, everyone hated me, and they hated one another as well." And finally, the curse of the 'Saw set caught up with him too. At the wrap party, Hooper said, "I lean back in the chair, a piece of the porch caved in, and I went backwards into a stack of two by fours with nails stuck in them." 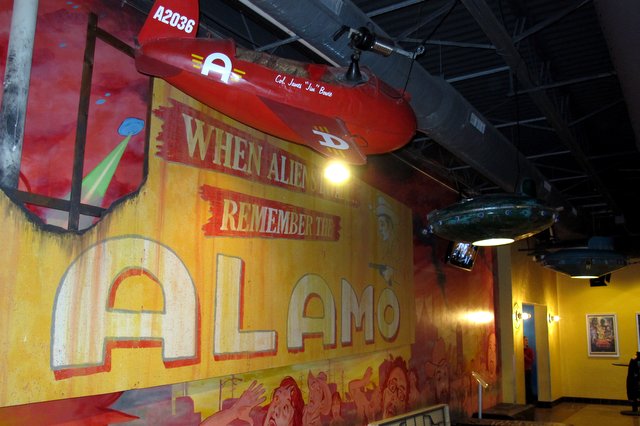 After the stars, after the screenings, League got the other part of his wish for the night. Old friends, old faces, old regulars hung out in the lobby and the foyer and chatted, and reminisced. About when the ticket office was where the Mondo pop-up store is now, or how they got drenched waiting for a film, or the crush at Fantastic Fest, or this press screening, or that feast, or when they first saw the ticket delivery robot, or the first time they got to pose with the You're Next fox-faced killer mural. And when the Drafthouse re-opens, they'll be back, and there'll be new stories and new films and more arguments about whether Dennis Hopper carried the chainsaw better than Matthew McConnaughey.