From the Vaults: The Roots of 'Promised Land' 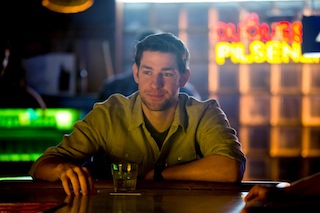 The story starts back when the new Gus Van Sant movie Promised Land, which stars Matt Damon and John Krasinski – who also co-produced and wrote this screenplay together – was nothing more than a first draft called Gold Mist, which was written by Dave Eggers.

The origins of Promised Land, according to a report last January on Deadline.com, was an idea John Krasinski had for a movie set within the "current climate of economic hardship caused by corporate greed." Krasinski paid Dave Eggers to write a first draft. Eggers, you may recall, was the author (with his wife Vendela Vida) of the book and movie Away We Go, which Krasinski was then co-starring in with Maya Rudolph.

Some time later, Krasinski's wife Emily Blunt was filming Salmon Fishing in the Yemen with Damon, and the three actors had dinner together. Krasinski told Damon of his movie idea, and Damon like it so much that he planned to film it for his first project as a director. He and Krasinski began rewriting the script that was to become Promised Land. Damon eventually bowed out as the director due to other commitments, even though he still wanted to co-star in it with Krasinski. At that point, Damon sent the script to his Good Will Hunting director Gus Van Sant. You may remember a little something about Damon and Ben Affleck bursting on the scene after winning a best screenwriting Oscar for that Good Will Hunting script – their first. Turns out that even in moviemaking, it's who you know that makes things happen.