Alamo South Pulls Out All the Stops For Closing Bash

Cramming everything you love about the Drafthouse into one night 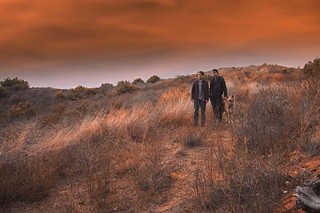 A visual analogue of your heart's future barren and surreal wasteland once the Alamo South shuts down... or just a screen shot from Don Coscarelli's 'John Dies at the End'?

Are you a Girlie Night fan? Swoon for sing-alongs? Only go in for arthouse and foreign fare, merci beaucoup? Can't get enough of them genre kicks? Whatever you are, whatever you love, the Alamo South Lamar is serving it up on a platter for its last day of operation on Jan. 3. (Updated to reflect sold-out shows and additional programming)

Hold your horses, it's only a temporary closure: As the South Lamar Plaza Shopping Center undergoes a major overhaul, so too will the Alamo South Lamar and next-door bar/playland-for-grownups the Highball (the latter already shuttered in November). The Alamo's keeping quiet on relaunch dates – for now they're just saying the duo will "reopen in a new, state-of-the-art facility at the South Lamar Plaza Shopping Center in 2013" – but boy-o, they're going out with a bang for sure.

Announced today were 11 special events, with a promise of more programming to come. Cult fave Don Coscarelli will be in attendance to screen his most recent film, John Dies at the End. (When the film screened at SXSW 2012, the Chronicle's Joe O'Connell called it "a singularly slick, otherworldly adventure tale about two guys who take a drug known as soy sauce that gives them psychic powers while unleashing alien baddies intent on destroying the world.") Gorehounds will thrill at the Texas Chain Saw Massacre double feature, wherein original visionary Tobe Hooper will hang around for screenings of his 1974 classic and the upcoming sequel Texas Chainsaw 3D. Drafthouse Films will host a first look at Kim Ki-Duk's Pietà, winner of the Golden Lion at the 2012 Venice Film Festival, while the Austin Film Society will screen Godard's 2 or 3 Things I Know About Her and Alamo programmers will trot out some of the very favorites in tough guy cinema and girlie movies.

See below for today's press release rundown for the Jan. 3 festivities:

(Big) Kids Club: THREE STOOGES Party!!!
All right, you lame-brained knuckleheads. It's time to drown ourselves in the toilet end of Golden Age Hollywood with the funnybone-busting buffoonery of history's most beloved witless wonders. Whether they're destroying priceless antiques, stumbling through a haunted house or tossing a pie in aristocrats' faces, this trio of subhumanoid goofnuts immortalize the grand art of blazing, rampaging slapstick idiocy. We'll be presenting FIVE of their most madcap short forays into dunce cap chaos, all in glorious 35mm. So crack open your skull and dislodge your noodle, cuz you sure ain't gonna need it. Instead, Larry, Moe and Curly will be crawling up your cortex to obliterate your meager IQ with a relentless assault of knee-slappingly zany physical abuse!! Heck, there'll even be a short featuring our favorite underdog stooge; part of our tireless crusade to legalize Shemp! Be here for an unforgettable night of anti-intellectual adventure, as we throw Alamo South Lamar's first (and last) THREE STOOGES PARTYYYY!!! (Zack Carlson)

ACTION PACK QUOTE-ALONG: THE BIG LEBOWSKI
We've been screening this quote-along at the Alamo Lamar every Monday for the past year, so it only seems right that we party with the Dude one final time. We've subtitled all of your favorite lines, man, and we'll be handing out props so you can feel like a real Little Lebowski Urban Achiever. Fight for the Dude's favorite rug, guard your toes from Walter and whatever you do, don't f*ck with the Jesus. (The Action Pack) SOLD OUT

FANTASTIC FEST PRESENTS: JOHN DIES AT THE END
With legendary director DON COSCARELLI in attendance!
Don Coscarelli, the creative cyclone behind PHANTASM, BEASTMASTER and BUBBA HO-TEP, returns to form with his first movie in a decade, a big screen adaptation of the cult novel JOHN DIES AT THE END. This thrill-a-minute comedy gorefest packs in more twists and turns than all the other movies you will see this year. See frozen meat monsters, phallic door hardware, lysergic tangents, sentient slugs, flying mustaches and more, all in the company of the nicest man in Hollywood, Don Coscarelli (Tim League) SOLD OUT

GIRLIE NIGHT: PRETTY IN PINK
To celebrate the end of an era at the Lamar theater, Girlie Night is kicking it high school style and throwing a cinematic prom. Come dressed in your finest pink ensemble (bonus points if you sew it yourself) and enjoy the John Hughes classic that created teams (Blaine vs Duckie!) way before Edward and Jacob. Start practicing your Otis Redding lip synch routine now! (Sarah Pitre)

AUSTIN FILM SOCIETY PRESENTS: 2 OR 3 THINGS I KNOW ABOUT HER
Jean-Luc Godard turns his thoughts to a rapidly changing Paris. A prime example of cinema interruptus, 2 OR 3 THINGS I KNOW ABOUT HER features snippets of thoughts about capitalism and communism, the war in Vietnam, the meanings of words, and a spreading indifference to the modern world and its problems. (Austin Film Society)

GIRLIE LATE NIGHT: BRIDESMAIDS
Closing night at the Alamo Lamar promises to be packed with nostalgia and film appreciation... and like any Alamo party, it is also guaranteed to get ridiculous. To go out with a bang, we're screening a film that really knows how to bring the crazy: BRIDESMAIDS. Slip on your most heinous bridesmaid dress and join us for an evening of hilarious awkwardness, bodily dysfunction and a little Wilson Philips karaoke. (Puppy party favors not included.) (Sarah Pitre) SOLD OUT

TOUGH GUY CINEMA: HARD TARGET
Van Dammage was the absolute best time of my life. I thought there could be no better way to say, "thanks for the memories, South Lamar" than getting a 35mm print of the movie that ultimately got the axe from that lineup and show it on our final night. This movie wasn't excised because it wasn't good -- quite the opposite, in fact -- it may have been discarded because it was just TOO GOOD. Lance Henriksen has been hiring homeless vets to play in a game of human prey and Van Damme is hot on his trail to find a missing man. AND THAT IS ALL YOU NEED TO KNOW. (Greg Maclennan)

DRAFTHOUSE FILMS PRESENTS: PIETA
Hired by moneylenders, a man lives as a loan shark brutally threatening people for paybacks. Without any family therefore with nothing to lose, he continues his merciless way of life regardless of all the pain he has caused to a countless number of people. One day, a woman appears claiming to be his mother. He coldly rejects her at first, but gradually accepts her into his life. He decides to quit his cruel line of work and to live a decent life. Then, suddenly, his mother is kidnapped. Assuming that it would be by someone he had hurt in the past, he starts to track down all the people he'd harassed. The man finally finds the very person, only to discover most horrifying dark secrets are better left unrevealed. Winner of the Golden Lion at the 2012 Venice Film Festival.

SING-ALONG: Best-of 2012
As we welcome 2013, we will sing-along to the greatest music videos that 2012 had to offer. We’ll hit every song that you’ve heard two billion times on the radio and watched at least five times on YouTube. While that may sound annoying to some, you and I both know that alcohol makes those songs super fun again. Singing at the top of your lungs with a theater full of strangers is the best way to say, “Oh yeah, that song is kind of fun. Let’s sing it really loud tonight and then NEVER LISTEN TO IT AGAIN!” So join us for one last celebration of 2012 and say hello to Ke$ha’s gold tooth, Nicki Minaj’s ridiculous outfits, Carly Rae Jepsen’s bangs, Psy’s crazy antics and more. If you pay any attention to pop culture at all, you’ll definitely see those things again. But they’ll be in a new year so they’ll be super fresh again! (Henri Mazza)

DRAFTHOUSE FILMS PRESENTS: WRONG
Dolph Springer (Reno 911’s Jack Plotnick) awakens one morning to find he has lost the sole love of his life – his dog, Paul. Desperate to reunite with his best friend and to set things right, Dolph embarks on a journey which spirals into the realm of the absurd. On his quest, he drastically alters the lives of several severely bizarro characters, including a promiscuous pizza delivery girl (Entourage's Alexis Dziena), a mentally unstable, jogging-addicted neighbor, an opportunistic French-Mexican gardener, an eccentric pet detective (Steve Little of HBO’s Eastbound And Down) and most mysterious of all, an enigmatic pony-tailed guru, Master Chang (William Fichtner) who imparts his teachings to Dolph on how to metaphysically reconnect with his pet. From fearless cinematic surrealist Quentin Dupieux, the director behind the head-exploding RUBBER, WRONG is a wholly original and hilariously hallucinatory universe all its own.

UPDATED (1/2/13): The Alamo has added two pay-what-you-can fundraising screenings – an 8pm showing of Nobuhiko Ohbayashi's 1977 haunted house oddity Hausu (proceeds of which will benefit a longtime Drafthouse employee's family, in need of an emergency foundation repair) and a 10:40pm screening of Jackie Chan's Rumble in the Bronx, which will benefit local nonprofit Mobile Loaves and Fishes.