There was a time in my life where 24 hours of straight film watching, though still uncommon was not unique, including a couple of stints at Science Fiction conventions where I ran projectors for roughly that long. But both marathon-watching and projecting have long been in my past, well until this Saturday, Dec. 8.

Even though I've been invited since the first Butt-Numb-A-Thon, this past weekend's BNAT 14 was the first I attended. A celebration of Harry Knowles and his birthday means that this 24 hours of film watching is very much a celebration of film. It is rich in diversity: new films and old films, classic hollywood and the unexpected, features, trailers and clips (mostly of forthcoming releases). Below I not only go over the features but mention the clips and catalog the trailers, after all this is a rich cinematic stew with all elements contributing to the extraordinary taste.

It started at noon on Saturday Dec. 8. As is evidently a Butt-Numb-A-Thon ritual the first screening of the evening was Teen Wolf (1985), also as part of that tradition the film didn't make it through to the end, having frames burn up twice.

Next up was the theatrical trailer for the forthcoming Star Trek Into Darkness.

This was followed by the first highlight of the event The Hobbit: An Unexpected Journey shown at 48/fps RealD 3D. The film was introduced by Peter Jackson, Fran Walsh, and Philippa Boyens, with Jackson in-person doing a Q & A afterwards. More and more I've come to find that rather than immersing me in the film and the experience of watching it, 3D causes a distancing, rendering the action on the screen cartoon-like and more unreal. The Hobbit is classic Jackson – sprawling, ambitious, captivating, leading the viewer into a fantasy yet still near-visceral world. The problem was it went on too long with the film more of a set piece rather than an emotional ride. The 48/fps that some have found alienating and others nauseating made the film visually deeper but also seeming more unreal. 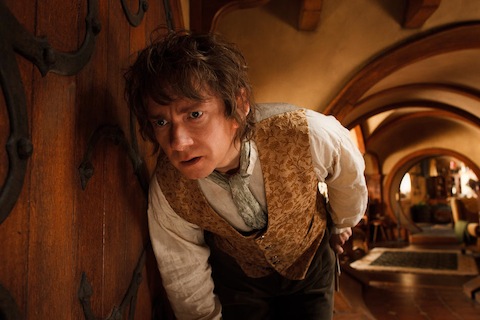 Martin Freeman in The Hobbit: An Unexpected Journey, which opens in U.S. theatres on Friday, Dec. 14

I had to leave for a previous commitment that was important. Thus I missed the trailer for G.I. Joe: Retaliation with a video intro by Dwayne "The Rock" Johnson and a video clip of Eleanor Powell at the tribute for Fred Astaire hosted by the AFI in 1981 followed by Broadway Melody of 1940 starring Astaire and Powell. Directed by Norman Taurog, the film features some Cole Porter songs that have become classics. There were three trailers next: All Hands on Deck (1961), Kingdom in the Clouds (1968) and Roger Corman produced Munchies (1987), directed by famed editor Tina Hirsch.

Although I missed the very beginning of Busby Berkeley's 1943 film The Gang's All Here, I was back for most of it. This delightful musical in beautiful Technicolor stars Alice Faye and Carmen Miranda at her very best. The cast is rounded out by terrific character actors including Edward Everett Horton, Eugene Pallette, and Charlotte Greenwood as well as jazz great Benny Goodman. There is a famed phallic music and dance sequence featuring bananas, if anything can be said to be phallic in the same movie as Miranda's costumes and headpieces.

Then trailers for a 1967 Czech children's film The Wishing Machine and The Women in Cell Block 7, with Spanish subtitles, another entry in the women in prison exploitation genre.

Those were followed by the dense, haunted, and haunting atmospheric horror film Mama, starring Jessica Chastain in a performance that demonstrates she truly can do anything. Two girls end up alone in a house in the woods. Or are they alone? After five years of searching, their uncle (Nikolaj Coster-Waldau) discovers them and brings them home to live with him and his girlfriend. But are the girls alone? The two girls are captivating in their performances (Megan Charpentier, Isabelle Nelisse). I gasped often but only almost jumped out of my seat two or three times. The film was introduced by and followed by a Q&A with director Andres Muschietti, cowriter and coproducer Barbara Muschietti, and producer Guillermo Del Toro. Del Toro also introduced a trailer from Pacific Rim. Next was a rough cut of the opening of World War Z with video intro and shout out to Harry by Brad Pitt, then trailers for Woody Allen's A Midsummer Night's Sex Comedy (1982), Frank Tashlin's exquisite farce Will Success Spoil Rock Hunter? (1957), and Peter Bogdanovich's 30s screwball comedy remake What's Up, Doc? (1972) starring Ryan O'Neal and Barbara Streisand.

A beautifully funny, classic studio effort Libeled Lady features a brilliant cast headline by Jean Harlow, Myrna Loy, William Powell, and Spencer Tracy. Directed by Jack Conway, this 1936 screwball comedy is about a newspaperman's (Tracy) cockeyed scheme to save his paper from a libel suite brought by an heiress (Loy). It involves using the charm of a questionable scoundrel (Powell) and his own often stood up at the alter fiancee (Harlow).

A film that can't be mentioned.

Three trailers: one from the Georges Franju remake of Louis Feuillade's 1916 classic serial Judex(1963). Another from Jerrico the Wonder Clown (1954), the original title of which was Three Ring Circus, one of the last Dean Martin and Jerry Lewis films. Although Martin was pictured the trailer only mentioned Lewis. The final one was Carnival of Blood (1970).

A rarely shown yet outstanding and definitive film noir Nightmare Alley was next. Set in a world of carnivals and con men it was directed by Edmund Golding and stars Tyrone Power, Joan Blondell, and the always wonderful Mike Mazurka. This 1947 features a Jules Furthman script based on William Lindsay Gresham novel. If carnivals can be said to have a dark underside, instead of just being dark overall, this one goes to the very bottom. More implicit than explicit it deals with carnival geeks among other things. 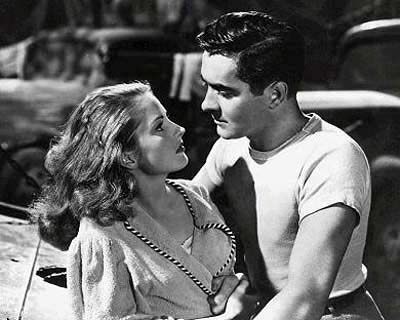 White Heat(1949), the brilliant gangster film that took the meaning of Oedipal to new heights with a classic brilliant James Cagney performance and generically right on target direction by Raoul Walsh. The scene where Cagney receives news about his mother is great Cagney and great cinema. Concludes with the famous "Top of the world, Ma!!" sequence. Co-starring Margaret Wycnerly as mother, Virginia Mayo as his wife, and Edmond O'Brien as the cop gone undercover to infiltrate Cagney's gang. Can be considered as a film noir but is more of the psychopathic gangster mold.

The Heat trailer and two hysterical scenes from the movie starring Melissa McCarthy and Sandra Bullock with in-person intro by director Paul Feig. This film features tasteless over the top humor which had me laughing out loud at trailer and clips.

Sandra Bullock and Melissa McCarthy in The Heat, opening in April

More trailers. The Blood of Heroes (1989), a post apocalyptic film starring Rutger Hauer as a former star attempting to redeem himself in a very brutal game similar to football and They Call Her One Eye aka Thriller - A Cruel Picture (1973), a Swedish rape and revenge exploitation film, which helped inspire Daryl Hannah's character in Kill Bill. It sounds similar to Ms. 45

Rollerball (1975), a classic 70s SF film and one of Harry's favorites that I can live without. Starring James Caan and all too obviously directed by the usually far too obvious Norman Jewison. It doesn't just telegraph its meaning and next plot developments, it practically delivers them in person.

The evidently BNAT perennial favorite, the trailer for Stunt Rock (1980).

The debut of the trailer for Pain & Gain with a video intro and shout out to Harry by director Michael Bay.

The next full-length feature was Bullet to the Head, Walter Hill's first theatrical film since Undisputed (2002) and Last Man Standing (1996). (In the interim, he directed the premiere episode of Deadwood and the TV movie Broken Trail and produced Prometheus.) I've long been a sucker for Walter Hill's work so I enjoyed this film much more than many if you check out other BNAT 14 blogs. Sylvester Stallone is a murderer for hire that gets mixed up in what turns out to be a violent and bloody double cross. The film races along with plenty of action and a near ridiculous body count. It worked for me. Watching a new Hill effort was a pleasure. 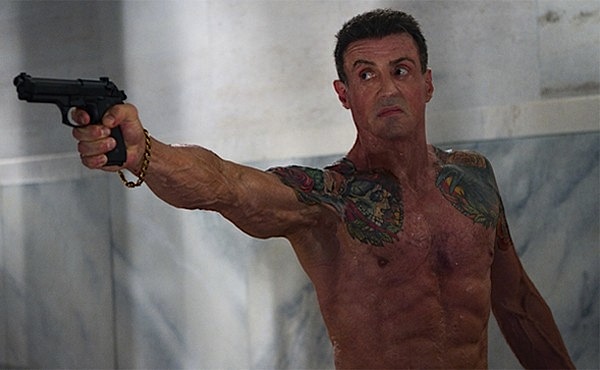 Sylvester Stallone in Bullet to the Head

Then it was over, time to head out into the sunshine and return to real life. A couple of hours more than 24 it was early Sunday afternoon when we emerged. Alamo Drafthouse Gets OK to Screen The Interview
Remember when Kim Jong-un threatened to nuke Austin? He'll be mad now. 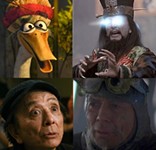