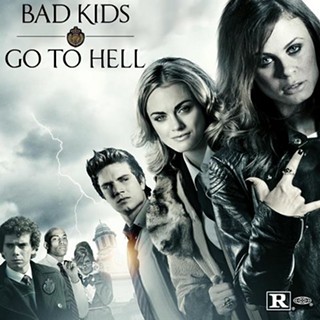 "Those kids were bad. These kids are -bad-." Cowriter Barry Wernick on the comic versus the movie of 'Bad Kids Go To Hell'

Two years ago, writers Barry Wernick and Matthew Spradlin told me with straight faces they were filming graphic novel Bad Kids Go To Hell. Against all odds, now it's on screens. Wernick said, "You don't know how many times we'd go somewhere and tell people, 'yeah, this is going to be a movie,' and we'd get this look. 'Oh, yeah, everyone says that.'"

This was bare-knuckle filmmaking: Filmed at Austin's Spiderwood Studios, with local bands A Giant Dog and Hex Dispensers on the soundtrack, and Wernick and Spradlin running the show. Talk about a family affair: UT graduate Wernick's wife Alyssa did the movie's costume design while she was pregnant. Now the film's over, he's pulling double duty on promotion and baby sitting. He said, "For some reason, we had the wardrobe on the second floor. Everything else is right near the set, and of course the one running the whole thing is my wife, who was pregnant."

Bad Kids is basically a sealed room murder mystery, in which annoying, spoiled brats turning on each other in a long, wet Saturday afternoon detention. (In Leah Churner's recent one-star review for the Chronicle, she noted a "jumble of story elements from The Breakfast Club, Ten Little Indians, and Scooby Doo: Where Are You!.") If the movie were adapted back into a graphic novel, you can bet the publishers had ripped up the comics code. Spradlin's original comic was all spookhouse scares: The adaptation isn't afraid to get its gore on from shot one. Anti-spoiler alert: From the pre-credit sequence, you'll know that is doesn't end well for most of the cast. As it goes along, you'll know why: "Likable" isn't in the script synopsis. Wernick described that as one of the "weak points" in the graphic novel. "Those kids are bad," he said," But these kids are bad." He added, "There are certain things that you can't do in a comic book that you can do in a movie, and certain things you can't do in a movie that you can do in a comic book. So we thought that, by having some different twists and keeping it fresh, our fans aren't just watching the thing they just read."

Still, the pair had to resist pressures to make it more generic and multiplex-friendly, even coming down to the title. As Wernick found out, a studio isn't going to release a movie called "because we can't have 'hell' in it. It's kids.' Matthew and I were just like, no, it's staying, that's the way it is." Still, that meant some tough decisions about whether to go for a hard R or soften it up and make a PG-13 crowd-pleaser. "If you're asking that question, then you should go with it," said Wernick. "We ask each other these questions, knowing what the other's going to say. We were like, 'No, this has to be R. We're not toning it down. First of all, the kids are going to talk the way seniors in high school talk, so it's going to have to be rated R." "

Even owners of the TPB may be surprised by how unpleasant Spradlin and Wernick make everyone, even their semi-hero Matt. The four-color version was an unfortunate doofus: On-screen Matt (Cameron Deane Stewart) is a scarcely a victim of circumstance. It's only in the context of the other spoiled brats that he looks even close to heroic. Wernick said, "We're sort of leaving it up to you to say, 'Oh, I feel bad for this pitiful Ben Stiller type,' who you always feel sorry for, or do you say, 'Wait, should I feel sorry for this guy, because he's an asshole too?'

Spradlin and Wernick have probably put as much effort into promoting the movie as they did in making it, dragging the original book, then the teaser, and finally the finished film to every comic convention that would accept them. Wizard World Austin Comic Con twice, Stan Lee's Comikaze Expo, and even the big daddy: San Diego Comic-Con. It's been paying off in terms of interest: For the last week, Bad Kids has been on IMDB's front page. They didn't buy that slot: Instead, it's down to IMDB's own algorithm for what visitors are searching for and looking at. Wernick said, "It's been us with epics, and us with Les Miz." The outreach wasn't just about promoting the film: It was about talking to fans about what they really wanted to see. Wernick said, "It took it from a fifth draft to the thirtieth draft and finally our movie."

It's also reflected in the cast. Some, like Degrassi: The Next Generation star Marc Donato, already had a fan base: But since making Bad Kids, Allie Faulkner was cast as Bianca in The Twilight Saga: Breaking Dawn - Part 1, Stewart appeared in Pitch Perfect, and just wrapped up a sasquatch-hunting return to Spiderwood with Eduardo Sanchez (The Blair Witch Project, Lovely Molly) where they're trying to prove that big foot Exists. Spradlin said, "It was downright weird how the actors booked during the course of making ours."

Having a pre-built fan base for the comic also helped finalize some casting. Wernick said, "We had all our fans suggesting who they'd like to see in our movie, or who they'd like to see die in our movie. Obviously we got the Paris Hiltons and the Lindsey Lohans. It didn't matter what age they were, they just wanted to see them die. But when it came to the headmaster, overwhelmingly, so many suggestions from fans to see Judd Nelson, the original bad boy from The Breakfast Club" After years of avoiding movies that even come close to evoking his landmark part, Wernick said Nelson read the script and called them straight back to tell them he was in. "He came to the studio with notes and everything. He was totally in to it."

Bad Kids Go To Hell is on release now. Read our review and find listings here.

Update: Star Roger Edwards will be at the 7pm screening on Dec. 8 at Galaxy Highland, 6700 Middle Fiskville, signing posters. 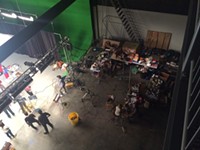 Can New Republic Studios Be a Game Changer for Austin?
Massive makeover could make Austin the new Atlanta for film