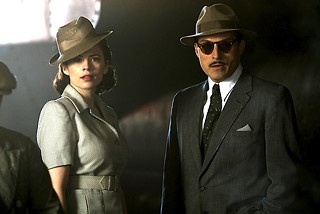 Restless, Sundance Channel’s new two-part miniseries that debuts tonight, puts women at the fore of a spy intrigue that spans one war and two generations.

Adapted by William Boyd from his 2006 novel of the same name and directed by MI-6 alum Edward Hall, Restless splits the narrative between two versions of the same woman: the sixtysomething Sally Gilmartin (Charlotte Rampling), living out retirement quietly in the English countryside in the 1970s, and a twentysomething Russian expat named Eva (Hayley Atwell), who in the ramp-up to WWII, was recruited by British secret service. Sally has become convinced that nefarious forces are out to get her – a fear initially dismissed as bonkers by her academic daughter, Ruth (Michelle Dockery, who plays Lady Mary Crawley on Downton Abbey). But as Sally explains the particulars of her past life as the Russian-born spy Eva, Ruth begins to see the story as not just plausible, but terrifyingly true.

As Sally absorbs the arc of Eva’s entry into spy games, the camera shifts to that point in Eva’s life; after a herky-jerky start, the series moves easily between the two time periods and they each are absorbing in their own ways, and Rampling and Dockery inject emotional immediacy into a framing story that otherwise might have undercut the urgency of the 1940s action. (While we're in the dark on the exact fate of Eva, the 1970s flash-forwards assure her survival of the war, at the very least.)

After a brisk training, Eva takes a job disseminating false press stories, mostly to the U.S., in order to influence public opinion and nudge the Americans into joining the war. That’s the one-sentence version of what Eva does; the script uses a lot more words, but still doesn’t get to a satisfyingly articulate place. There’s a fine line between suspenseful and simply confusing, andRestless’ first episode is more likely than not to wind up on the wrong side of that line.

Then again, the atmosphere and art direction and terrific cast distract from the slim amount of armchair-sleuthing afforded the audience. (The superior second episode rewards the viewer with more clarity – and more action – as it shifts to New York and New Mexico.) Atwell (Brideshead Revisited, Captain America) was born to wear a full red lip in these kind of period parts, while the slickly mustached Rufus Sewell plays Eva’s spymaster with a confident mix of God and country rigidity and can-he-really-be-trusted? seduction. By the end of Restless’ four hours of smoky rooms and bedroom eyes, globe-trotting plots and double-crossing hearts, I was fairly seduced, too.