Storied fashion mag has a big birthday and a little hindsight 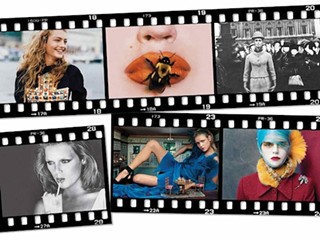 The fashion editor is celebrated tonight in HBO's In Vogue: The Editor's Eye, a documentary looking back at 120 years of Vogue magazine.

Directed by Fenton Bailey and Randy Barbato (Party Monster, The Strange History of Don't Ask, Don't Tell), the film airs tonight on HBO, two days after a swanky premiere party at New York's Metropolitan Museum of Art. It must have been a relief for everyone on hand to get on with it, considering our last look inside the magazine's throne room was 2008's fluff piece The September Issue (also known by some as The Fly on the September Issue). All of which is to say, of course, that we have high hopes for this new fly, though we know it must land, at some climactic point, on Anna Wintour's chiseled nose. Wintour, who took the helm as editor-in-chief of Vogue in 1988, is famous for a rigid and understated personal style, brusque manner, and wearying quests for perfection in her precisely curated editorial pages.

The Editor's Eye highlights the fashion editor's creative process, which includes the coaxing of vision from such lens masters as Annie Leibovitz and the late Herb Ritts. From poetic living legend Grace Coddington (Fashion Director, 1988-1995; Creative Director, 1995-present), of whom fellow editor Hamish Bowles said, "There is always going to be something magical about her narrative threads," to the singular enterprise that was Diana Vreeland (Editor-in-Chief from 1963 until her firing in 1971), the editors themselves are top-shelf jesters and charmers. Another pleasure of the film is how it rifles through the Conde Nast archives, which date back to 1909 and include photographer Lee Miller's startlingly frank frontline work during World War II.

The timing for this film couldn't be better, as senior fashion editors like Kate Lanphear of U.S. Elle and former Vogue editor Carine Roitfeld (now Global Fashion Director for Harper's Bazaar) are having a day in the sun much like the one stylists enjoyed under Rachel Zoe's wispy reign. And no flies buzz around Ms. Wintour: Her knowledge of fashion and the colorful accolades with which she lauds her brood make her fun to watch here.

An eponymous hardcover book beckons, as well (Abrams Books, $75), the images in which are shockingly large to our thumbnail-strained eyes. We haven't seen pictures blown up like this since W magazine was a broadsheet! It is the kind of book we expect from Vogue, and it's looking very gift-worthy, too.