Scoot McNairy in Killing Them Softly

Back in October, the trade paper Variety named Texas-born actor Scoot McNairy to its annual talent spotlight called "10 to Watch." One of the things that must have caught their eye was McNairy's co-starring role in Killing Them Softly, which opens today.

In Killing Them Softly, McNairy co-stars with such A-listers as Brad Pitt, James Gandolfini, Richard Jenkins, and Ray Liotta. Not bad for a guy who wasn't sure initially sure he wanted a career as an actor.

Raised in Dallas, McNairy also spent time at his parents' ranch in Paris, Texas, before moving to Austin when he turned 18 to attend the University of Texas. It was here in 2001 that he was cast in his first film role as one of the stars of Alex Holdridge's first feature film Wrong Numbers. That film tells the story of a bunch of underage 19-year-olds trying to buy beer and the long night of weirdness that unfolds as a result of that quest. Wrong Numbers marked the beginning of a sustained friendship with Holdridge, who cast McNairy in two more films about modern romantic dilemmas: Sexless (2003) and In Search of a Midnight Kiss (2007). (Wrong Numbers won the Audience Award at the 2001 Austin Film Festival; Sexless won the audience and jury awards at the 2003 SXSW Film Festival; In Search of a Midnight Kiss won the John Cassavetes Award at the 2009 Independent Spirit Awards.)

Not long after making Wrong Numbers, McNairy moved to Los Angeles with the goal of becoming a cinematographer. Yet he continued to get steady acting work in indie films, commercials, and episodic TV. Most recently, McNairy has had a recurring role on Bones. His lead performance in Gareth Edwards' indie masterwork Monsters garnered him additional notice and his wife

There's no doubt, however, that 2012 has been McNairy's breakout year. He has gotten to work with some of the industry's top directors and actors. In addition to Killing Them Softly, McNairy also appears in Ben Affleck's Argo as one of the six Americans hiding out in the Canadian embassy in Tehran. Upcoming films include Steve McQueen’s Twelve Years a Slave and Gus Van Sant’s soon-to-be-released Promised Land, and Lynn Shelton’s Touchy Feely, which has just been given a slot at January's Sundance Film Festival. 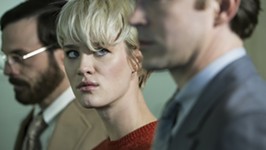