‘The Comedy’ Is Not Joking Around

Rick Alverson and Tim Heidecker on their polarizing new film

As a man named Swanson, Tim Heidecker moves through Rick Alverson’s third feature like a scourge. 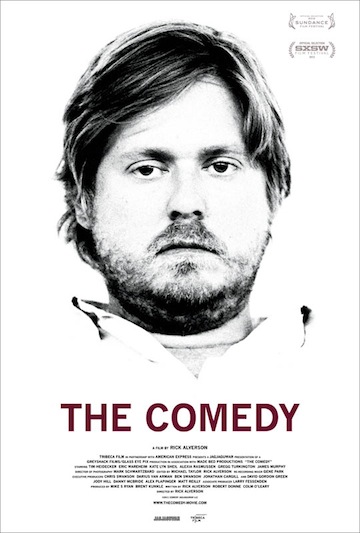 As with most characters in The Comedy – and, from the perspective of most of those characters, most everything that happens in The Comedy – his name is inconsequential, revealed only in the credits. He spot-colors an otherwise meaningless existence with stunts ranging from the hilarious to the abject, the harmless to the devastating.

While his wealthy father clings to life in a coma, it is the 35-year-old Swanson who seems to be waiting to die, wandering around summertime Williamsburg with his cohort, uniformed in cut-offs and hipster shades. When you watch them playing wiffleball (one of Okkervil River frontman and erstwhile Austinite Will Sheff’s several cameos), numbly guzzling PBR, and riding bikes for want of anything better to do, all set to William Basinski’s moving instrumental “Dip 1.1,” it is less an ode to joy than an elegy for … something.

The performance that Alverson (The Builder, New Jerusalem) has coaxed from Heidecker (Tim and Eric Awesome Show, Great Job!) is itself something to behold. It is also controversial. Somehow, a film about a bored rich white guy who is not a serial killer has earned the tag of “transgressively brilliant” from the Village Voice. It has seen walkouts at Sundance (and successful screenings at SXSW and elsewhere) and a scathing review from The New York Times.

The Chronicle recently spoke by phone with the director and his lead actor in advance of their Nov. 29 appearance in Austin.

The Austin Chronicle: You have generated some pretty charged responses with this one. Are there any that have been of particular concern? For instance, I was reading A.O. Scott’s review in the Times –

Austin Chronicle: So, you read it, too?

Tim Heidecker: I’d like to think that that review is A.O. Scott’s retirement letter from the world of serious film criticism. It’s like, “I’m no longer engaged in talking about films seriously. I’m incapable of doing what I was assigned to do.” I think what [Scott] was missing from the film was a dramatic courtroom finale, in which the character is tried and hanged for crimes against humanity. We should have just taken our cue from the abortion that was Flight, that movie everybody’s coming all over, which is one of the worst things I’ve ever seen.

Rick Alverson: If we need moral certainties in our movies … that’s unfortunate. The idea that unseemly behavior in a movie, and that confusion between form and content isn’t actually beneficial to the larger medium, is unfortunate. I don’t know how poor A.O. Scott’s memory is, but if it is indeed poor, we could disguise Pink Flamingos as a contemporary release and let him take a stab at that. Tim Heidecker in The Comedy

Austin Chronicle: The film willfully defies conventions of narrative. In scenes in the garden and in the church, there are moments just waiting to be redemptive –

Rick Alverson: Resisting the traditional desire for reckoning in those moments, that is a big part of what the film, formally, is trying to do. We’re not really interested in those easy answers and responses to movies. It would be so vindicating for the audience to see the quote-unquote bad guy beat to a pulp, and we would feel affirmed by it, and we’d probably leave the theatre with the thing tucked away in its particular drawer in our minds. There’s more of a potential for resonance and more of a potential to be changed when movies refuse those easy tropes. Austin Chronicle: How did scenes like that come together? How much was scripted, and how much did you leave up to Tim and the other actors?

Rick Alverson: All of the scenes you mentioned were scripted, but we don’t use any scripted dialogue. I cast for the actors’ voices, and for their characteristics, and they bring them to the table. We incorporate, and recontextualize, and fictionalize a lot of their innate talents and ways of speaking.

Austin Chronicle: Tim, do you think your character undergoes any kind of change by the end of the film?

Tim Heidecker: Oh, I feel like my interpretation of watching it is that there’s a sense that the ice might be thawing. There becomes an awareness of a problem and some kind of hope for the future. I see that, and some other people have, and maybe some people won’t. It’s very subtle, and one thing Rick is interested in is not creating these melodramatic character arcs, like Ebenezer Scrooge in the last two minutes of A Christmas Carol, like suddenly he’s the nicest guy in the world. We’re tired of those kinds of stories. This is about a guy who, really, [we're] only witnessing a couple of months, or maybe even a month, I’m not sure, of a character’s life... Those kinds of changes are very small, or don’t happen at all. That’s the kind of movie Rick wanted to make.

Rick Alverson: The idea that we experience so many epiphanies in these movies, it’s such a potentially dangerous misconception about the way the world actually functions. Audiences are conditioned to some degree to expect to just drop in and see the epiphany, to see the grand gesture and the moment of transformation. A denial of that needs to happen. There needs to be counterweight to some of that idiocy.

Tim Heidecker: Let me also just say that when the film works on these really small notes and moments, for Rick to end the movie the way he does, with the beach scene and child, there’s not an answer and a finale that’s handed to you on silver platter, but there are some very emotional, almost poetic, feelings coming from that last scene. It wasn’t literal, but movies should work on a subconscious level. In a movie that’s filled with subtlety, you have to appreciate every moment.

Austin Chronicle: Tim, you’ve talked elsewhere about how you and Swanson are similar in some ways, in terms of mannerisms and speech patterns, and that the role didn’t require a lot of method-acting groundwork. But clearly you can’t be exactly like him, I hope. Can you talk about inhabiting a character like this, and whether you felt much vulnerability as an actor, especially one who hadn’t done anything like this in the past?

Tim Heidecker: I try not to get too analytical or hypothetical about anything, because it’s just too hard to know how anything’s going to go. I just kinda went by my instincts, and consultations with a few people, that this seemed like an exciting, interesting thing to do. The film ends up being very severe and very heavy and dark, but there wasn’t that feeling or mood throughout the process. There wasn’t that kind of dark energy or atmospheric music hanging over everything. A lot of it, and a lot of filmmaking in general, is fun. It’s fun to collaborate with good, smart people. There were some specific issues with the nudity and that kind of stuff that were uncomfortable for me, or challenging, but you get through that, and nothing was ever too insurmountable for my psyche to deal with it. I went in to it with no exceptions, and tried to be generous and give an honest performance, and tried to let Rick run the show and let it be his movie and let him make it. That’s all I can do. 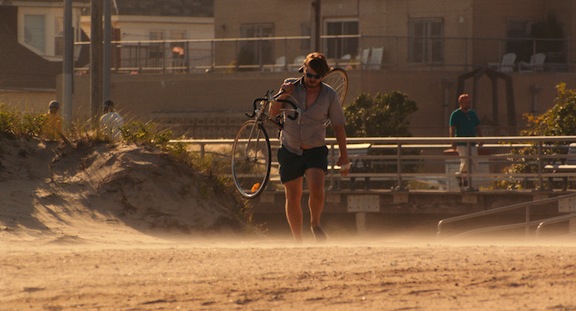 Tim Heidecker in The Comedy

Austin Chronicle: Rick, was this a deliberate shift from protagonists you’ve created in the past? You’ve gone from disadvantaged, downtrodden characters to someone who certainly has his own issues, but who in a lot of ways is this paragon of white male entitlement. Was that something you set out to explore and examine?

Austin Chronicle: Can I ask why?

Rick Alverson: Well, in the first two movies, and in this movie, they examine ideas about America, and the disconnect between conceptions of that and the actual facts. The movie for me initially, and throughout the whole process, from the production to the edit, and even in the conversations after the whole thing, there’s an analysis, an exaggerated dystopian horror depiction of an achieved utopia: unlimited leisure, unlimited access to information; that’s the kind of tepid environment, where there is no more capacity for change, in a way. My previous films looked at struggles with achieving or trying to achieve. This film looks at what happens once it’s achieved.

Austin Chronicle: That second cab scene is the most passionate, earnest, and engaged that Swanson is throughout the film. He even says, “I’m being serious. I’m being honest,” and he says it urgently. Why is that? What is he searching for there? What is that about?

Rick Alverson: I think he has a legitimate curiosity, and he finds himself in a place where he has range to exercise that curiosity. He’s troubled by a stasis in his life, and we see him engage in a creative exploration, regardless of whether it’s manifested in antagonism or altruism. I think that he chooses antagonism because altruism is out of his grasp; there’s no necessity for it. So, we see him endeavoring to a certain kind of social exchange that has some meaning to it. It’s obvious that he might want to get the shit kicked out of him, which never occurs, and having failed in that pursuit, that’s where the recreation comes in.

Austin Chronicle: Were scenes like that, Tim, a blast to perform?

Tim Heidecker: It was a bare-bones crew, and we were shooting a lot of nights, so there were challenges to it, but it’s fun to yell at somebody when it doesn’t mean anything, when there are no consequences to it. Rick created just such a great atmosphere of freedom and creativity and collaboration, that is was a real dream come true for me to get to play this character that, while horrible, was a lot of fun, as well.

Austin Chronicle: How was your South by Southwest experience? I hope we were friendlier than some other crowds. Anything you’re looking forward to on this visit?

End of an Ear (2209 South First St.) will host a listening party of The Comedy soundtrack on Thursday, Nov. 29, 7-9pm, with Tim Heidecker and Rick Alverson will be in attendance. The party is followed by an Austin Film Society screening at 9:30pm, at the Alamo South Lamar; Alverson and Heidecker will take part in a post-film Q&A. For ticket info, see the AFS website.

The Comedy opens theatrically in Austin on Friday, Nov. 30.

No Catharsis in 'The Comedy'
Rick Alverson and Tim Heidecker talk about an A.O. Scott savaging and the danger in grand gestures