Godless commies invaded America once before 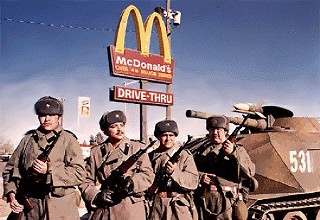 Back in 1984 before it became a cult classic (and was remade and released anew this week), Red Dawn was just another movie that came out that August. The summer of 1984 kicked off with Indiana Jones and the Temple of Doom, which – along with Gremlins – created a stir over the amount of violence on display in these PG-rated movies.

By August 1984, the PG-13 rating had been invented, and John Milius' Red Dawn was the first movie to be released under this new categorization.

We've used the occasion of the remake's release to dig up the Chronicle's review of the original, which appeared in the September 7, 1984 issue, right around the time of the paper's third anniversary. It was written by Steve Fore, who was an avowed John Milius fan and expert on Westerns and war films, and a friend of ours from our graduate-school days at UT and CinemaTexas. The Texas-bred Fore now teaches film studies in Hong Kong.

Also entertaining to note is that Charlie Sheen, who plays the younger brother of the film's lead actor, Patrick Swayze, is nowhere to be found in the Chronicle's list of credits for Red Dawn. Sheen may have played second banana in the film, but Red Dawn marked his first screen role of any significance – and, obviously, didn't seem notable. Certainly at that point, Sheen took a back seat to brother Emilio Estevez, who starred in another cult hit playing in theatres that summer of 1984: Repo Man.

Reprinted from The Austin Chronicle; September 7, 1984:

If you’ve gone to the movies at all this summer, you’ve sees Red Dawn’s outrageous trailer – the one with Russian (and, gasp, Cuban) paratroopers blowing up school buses and machine-gunning high school kids under the goal posts. This, of course, is the film that begins with the premise that an invasion of the heartland of these United States by the godless commies is not only plausible but inevitable. Okay, okay, we only hear this paranoid cold war stuff on Ronald Reagan’s radio show these days … but Red Dawn had possibilities (for me, anyway) mainly because it is the creation of John Milius, the self-professed “right-wing anarchist” of the New Hollywood, a truly talented and prickly personality who has been associated as director, writer, and/or producer with some very interesting and important films (Apocalypse Now, Dillinger, Uncommon Valor, Dirty Harry, The Wind and the Lion).

The thing about Milius is that he professes to hate sanctimonious, flag-waving, “conservative” politicians just as much as he despises pasty-faced “liberals,” preferring instead to create fictional universes based on principles of radical individualism and grass roots community spirit derived largely from the films of the old masters – Hawks, Ford, Walsh. All of which nails Red Dawn as something of a failure of nerve. The film has some truly great right-wing anarchic moments, bur for the most part its politics are all too predictably – and only – militaristic, misogynist, racist, and xenophobic; for too much of its running time, it’s just a childishly simplistic masturbatory fantasy for right-wing hebephrenics that’s mostly safe enough to play the White House.

Narratively, it’s somewhat incoherent – most of Red Dawn’s teenaged guerrilla fighters are never sufficiently established as individual characters, so when they start getting wasted it’s hard to remember who was who and why we should care. Speaking of wasted, Harry Dean Stanton is, but on the other hand Ron O’Neal is just fine as a conscience-stricken Cuban officer, and the sizzlingly charismatic Powers Boothe (Southern Comfort, HBO’s Philip Marlowe) as a downed fighter pilot single-handedly kicks the movie into high gear for the 20 minutes he’s allotted. In all, despite my negative tone here, I enjoyed Red Dawn, though it rarely soars, it is often exciting, and as an event sociologicale, it’s fascinating, appealing much less to simple neanderthal blood than, say, the most recent Dirty Harry film.

One other thing – we saw Red Dawn with an audience that seemed to be made up mostly of 19-year-old gun nuts. One commented to us before the movie started that he was there to check out the Soviet military hardware and “to see Ivan get his.” There was a constant murmuring around us throughout the film as these young John Waynes discussed matters of military strategy, weaponry, and the wartime necessity to suspend conventional standards of morality. Thus, it seems a three-tiered rating is in order for Red Dawn: